Is There a ‘Family Factor’ in Mediation? A Jamaican Perspective

How do different family types influence the parent’s role in a child or teen’s life online? Anthea Edalere-Henderson looks to Jamaican family relations to understand online engagement. Anthea works at CARIMAC, The University of the West Indies, Mona where she is interested in the development of a critical Caribbean scholarship for understanding 21st century information technologies. Her research is focused on communication and media studies, with a special emphasis on the globalised forms of media technologies, globalised forms of media consumption, branding, children-as-audience research, and parental mediation of digital tools. 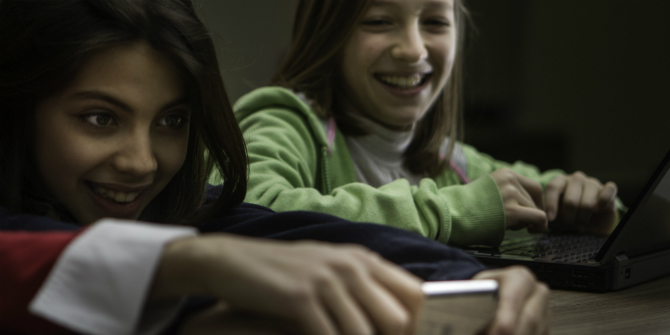 I talked with a parent the other day. Lisa and I are friends, roughly the same age. She explained how she had checked her teenage daughter’s mobile phone for messages – a routine practice for her, as she admits – and discovered to her dismay that her daughter had become the victim of an online diatribe from a former boyfriend. It had been taking place on WhatsApp, a messaging platform rising in popularity in Jamaica. The hurtful, demeaning messages from the boy had been seen by several friends in the chat group, and this had been going on for several weeks.

My friend’s maternal, protective streak was on high alert.

A question came to mind: how many parents – especially in the Caribbean, where I live – actually check their children’s online engagements – text messages, chat group conversations, website histories, social media profiles? Parental mediation is more necessary than ever, as children’s use of digital technologies becomes increasingly commonThe challenge is that children are increasingly accessing digital technologies that their parents may not know how to use, so monitoring their use of these tools can be problematic. Both within popular culture circles and institutional settings, there is a notion that parents are technological laggards. However, in many countries parents are becoming digital natives themselves, and although research is sometimes thin, some Caribbean parents are managing to keep pace.

Lisa knew how to check message histories, and was also quite perceptive of subtle changes in her daughter. In fact, it had been her suspicion that something had been bothering her daughter that led to the investigation in the first place. In terms of monitoring her child’s use of digital media, Lisa had some advantages – she is tertiary educated with some knowhow of technological gadgets, has a measure of economic stability and with it, freedom to choose the hours of her working week. She is also part of a two-parent household.

Studies have unearthed some demographically related factors, like income levels and education, that influence parental mediation. In America, the hours youngsters spend with media (TV programming, music, computers, movies and video games) drop in households where there is a parent educated beyond college level. These findings hold for all media except print, where time spent increases in households with a college-educated parent. In Europe, findings indicate rather high levels of device ownership among lower-income, less educated families. This contrasts with practices of parents from higher-income and more educated backgrounds, who try to encourage their children to enjoy non-digital as well as digital activities. While income and education play a role in parental mediation, also important are parental comfort levels with technology, and parenting styles.

Families in the Caribbean

Parenting in the Caribbean region provides some additional complexities based on our sociopolitical history – there is a concentration of varied ethnicities originating from European, African and Chinese influences, as well as a combination of languages, family traditions and cultural practices shaped by that past. Status and wealth differentials persist, posing a range of challenges. These realities also impinge on how parents understand and manage their children’s engagement with digital media.

It’s wise to be cautious when making generalisations about people, but subgroups in the Caribbean do have varied practices and perspectives about the family, and parenting roles in particular. Children used to be brought up to be ‘seen and not heard’, especially among poorer Afro-Caribbean parents who were associated with severe, authoritarian forms of parenting, with beatings of children and adolescents frequent practice. Sometimes this is associated with the real stresses of being a single parent – many Caribbean women raise their children without the support of a partner. And there are socioeconomic and cultural influences, such as the migration of parents, inner-city criminality and cultural tolerance for repressive discipline.

In an April 2015 pilot study1 on media use in the context of the home, a number of focus groups were carried out with Jamaican families. In one middle-class family of four – father, mother and two girls aged 11 and 3 – they spoke of actively selecting and prescribing the kinds of media their daughters could access. Their mother, Sherry-Ann, was discriminating about ‘kiddies’ programming on cable channels, and careful about how her elder daughter uses the tablet:

But yes, you have to monitor, you check the history frequently to see what it is that they’re doing on these devices, and there are times that you just have to take it away from them, being the parent.

Sherry-Ann’s awareness contrasts with that of Cynthia, a working-class woman responsible for raising three pre-teen grandsons. Cynthia does this single-handedly, as her daughter’s work requires her to live in another town. The family mentioned having a computer, television and mobile phone at home, all of which the children use from time to time. Cynthia acknowledged that her grandchildren master some of the gadgets before she does, and that her approach towards dealing with what she deems as inappropriate content was to tell them “it wasn’t theirs” – end of story.

Both Sherry-Ann and Cynthia appeared similarly diligent in using restrictive mediation when they considered it necessary, but Sherry-Ann had a more informed strategy towards monitoring her children’s media engagement. She was also more digitally literate.

What role may Sherry-Ann’s tertiary education, or family structure, play in equipping her with more knowledgeable mediation tools and approaches? Caribbean researchers are now considering these issues as they investigate the role of family in an era of digital affordances.

But back to Lisa. Her perspective was that as a parent, she needed to care for and protect her daughter, and in this case, her intervention had to involve moving into her daughter’s online space. The young man was confronted on WhatsApp (at Lisa’s instigation), and eventually posted an apology, which the daughter accepted. What kind of outcome might have occurred if the mother hadn’t known about WhatsApp? Are there more effective ways of intervening when a teenager is being harmed by online activities? While more research regarding socioeconomic factors in parental mediation needs to be done in the Caribbean, studying the nature of family relationships themselves may be a useful starting point, since it is through the everyday experiences of ‘being family’ that parents and caregivers provide the oversight needed to inspire and protect children in the digital age.

1 I acknowledge the contribution of students in the 2015 cohort of the Media and Children course (CARIMAC, The University of the West Indies, Mona), whose findings from a pilot ethnography contributed to this blog.