World of Warcraft (WoW) is a massively multiplayer online role-playing game with a subscribership of 10.2 million1. The player is offered a variety of options when choosing a character. There are two factions each with six races (and the recently added pandarens which can play either faction), two genders, and there are ten classes and each class can have one of three specializations. There are many choices just to select your character. Then there are professions to choose and play style choices (like whether you want to join a guild), and the list goes on. Sitting down to just create a character can be overwhelming. Do I choose an orc, a troll, a gnome, a tauren? I agonize over these choices at the beginning of playing a RPG. The last time I created a character I settled on a  Female Blood Elf (or Belf for short). This made me a horde faction with friendly races including Taurens (giant cows that walk on their back feet), orcs, goblins, trolls, and the undead and foe races including gnomes, dwarves, night elves (purple-toned cousins to my blood elf), draenei (whom I can only describe as bluish humanoids), and humans. The blood elf’s orangish complexion, bright green eyes, and long pointy ears drew me to them as a race. But if you’ve played an RPG before you know that choosing your character race is only the first step, you still have to make the equally tough decision of what type of class to play. Do I want to play a druid, a rogue, a warrior? Warrior is my style, I like to get up close and personal while in combat but it wasn’t quite right. But then I saw the paladin class. Perfect. Up close and personal fighting, able to heal myself and others so great for playing by myself or in small groups.  As I started playing this character I realized that protection was the right specialization for me (a specialization designed for taking lots of damage from enemies and keeping the attention of said enemies – nothing as exhilarating as being as surrounded and pummeled by a mob of enemies and coming out smiling).  While playing I would get in situations where I would need to look up information about the game, I would find wikis, corporate websites, forums, guild websites, and specialty websites that give information about professions and the like. All offering a host of up-to-date information and many of the most popular resources being community created and maintained. 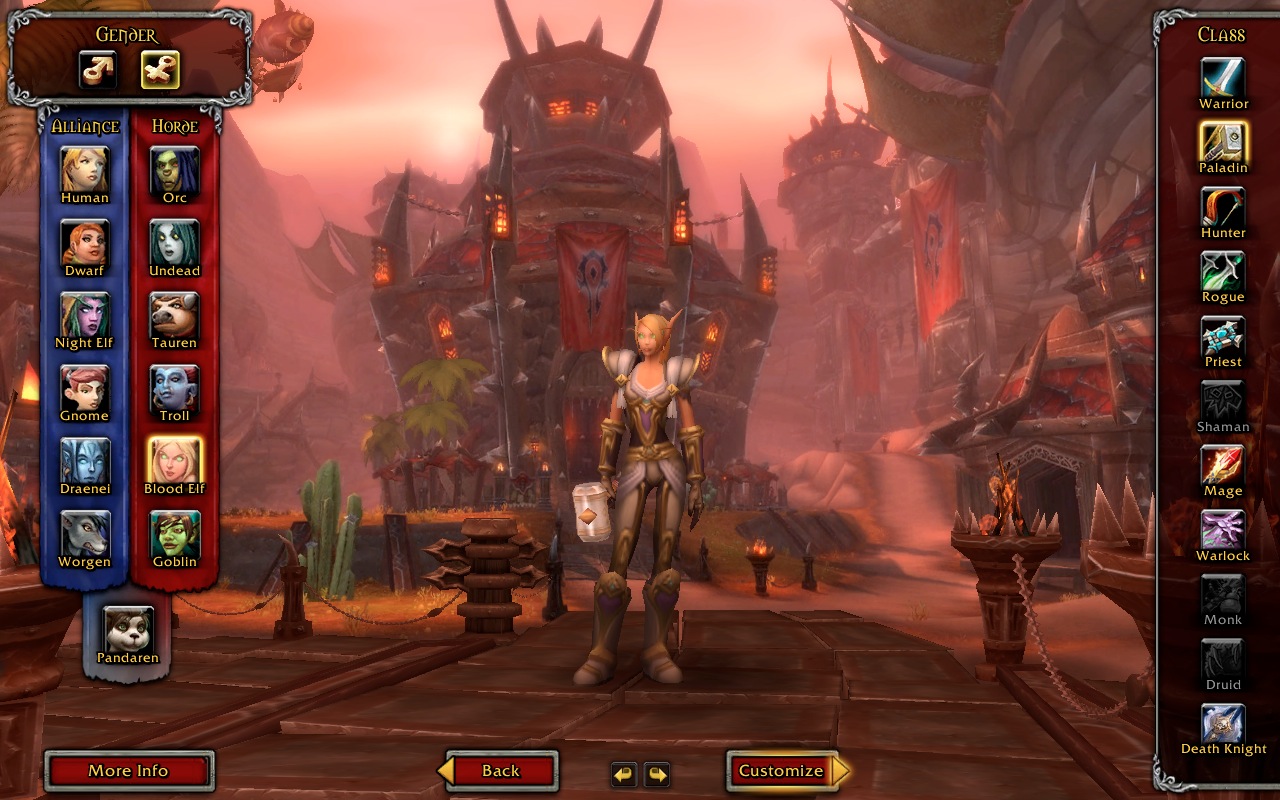 In my research I explored how people developed and implemented these skills in online communities, specifically the active and always changing community around WoW. For those WoW players out there, my data came from just before the release of Wrath of the Litch King to just before the release of Cataclysm. For those who are not WoW players, those are two expansions to WoW. The reason for sharing the data collection period is that the game changes with each expansion, so if someone is playing now the practices may be slightly different. The reasons for choosing WoW include age and stability of this community, as well as the fact that the game is continually updated and still being expanded, allowing for exploration of information literacy practices under changing circumstances, which required the community members to continually update their resources.

My research looked at information literacy practices at multiple levels of participation, from the individual, to groups, to the collective intelligence of the community. The individual needs to have the most rudimentary information literacy practices in order to participate in the larger community. For example, the individual needs to know when they don’t know something. This may sound simplistic but knowing when and what you don’t know is important to being able to ask a question. Along with knowing when and what to ask, recognizing the resources available is very important. Through the use of information horizon maps and individual interviews I was able to observe a pattern of behavior that associates skill level in the game (or level of expertise in a topic) with a more focused set of resources, while those who are more inexperienced turn to general search and known peer sources, like a friend or family member, for information. From this data I created a master map of resources used by players ranging from novice to expert that describes the web of resources and strategies used at the individual level.

At the group level, players interact with each other in situations like chat channels in cities. There are a number of chat channels in the game. You can chat just between two players, between a small group that is playing together, between members of a raiding party (which is at least 10 players), or an entire guild. There are also larger channels; for example, each city has a set of channels available to the player, including general chat, trade chat (designed for trading items or services between players), and a looking for group channel – although trade chat gets used for most everything. Here the most frequent questions are those that can be answered in short answers. Community conventions discourage long questions and long answers because a player can only see a limited number of chat lines at a time and lengthy chats clog up what a player can see. The questions asked are usually point-of-need information, such as choosing between armor or getting directions to a certain location. This form of communication is synchronous and instantaneous, and is great for quick information needs. Forums are also group level but allow for more in depth discussion. These questions have a tendency to focus on game play strategy for group activities like running dungeons and raids, as well as long term strategy such as choosing specializations and professions for the player’s character. From the chat and forum data I was able to determine actual practices used in the community by looking at the conversations and strategies used by the community to help individual members solve their information needs.

Finally, I looked at the community level and explored the effectiveness of the community’s collective intelligence. I choose the WoW Reddit forums. From this analysis I found that of all posts on the threads I sampled, almost 70% were correct answers with another nearly 10% being made up of agreement and acknowledgement statements in conjunction with the correct answers. With actual questions taking up 10% of the posts that leaves a mere 10% for incorrect answers, subversive posts, and superfluous posts (the largest category). From this analysis I was able to quantify the sometimes elusive concept of collective intelligence.

Information literacy is a vital 21st century skill, and it is often talked about that students do not excel in these practices. However, a core set of participants in my study were adolescent guys, many of whom were disengaged or struggling in school. The guys ranged between 13 to 17 years old and came from rural and urban areas in Wisconsin. This group of participants showed sophisticated information literacy practices finding, evaluating, using, and sharing their knowledge with others, although many of them read below grade level, were in remedial courses, or had been moved to alternative schools. They thrived in this information-rich  connected learning environment. One participant known as Noel in my research created a complex information horizon map demonstrating not only the network of resources and their interconnected that he used around WoW but also a corresponding segment of his map that showed the information sources he used around school (most of which were digital resources and all were resources he himself deemed as school resources). His intention as he told me in the interview was to see if he used similar resources and strategies in both environments. In his case he did. He as an advanced player had a map the was covered in specific resource names that he used for specific purposes, using a general search in a search engine or asking in a trade or general chat channel as a last resort instead of a first attempt. The guys in this study, evaluated and synthesized information simultaneously when getting a deluge of responses from a chat channel on which they had asked a question. The instantaneous and peer-supported nature of this community makes it a great place to study information literacy in a connected learning environment

As a connected learning environment, WoW embodies the core principles in spades. The peer-supported environment in-game is designed for instant communication between players, which creates a great opportunity for just-in-time information. And being a peer-supported community it is a great place for youth who get to be on equal footing with those around them and can take on the role of expert which is not always available to them in other settings in their daily lives. The out-of-game resources thrive because this community brought together by interest has a shared purpose of producing and maintaining the most up-to-date resources, which in a constantly updated and regularly expanded virtual world is a continual task. And although not academic in a traditional sense or strictly in a connected learning sense, WoW fosters skills in traditional academic disciplines like reading, science reasoning, math, and information literacy5, just to name a few. Connecting this great environment back to youth’s traditional academic settings would create an opportunity to help youth harness the skills they already have and build from them.