By Lone (right) and mitosis (left) on TeamLiquid.net

Consider a circle drawn on a track field to have a radius of 5 feet.  If you had to run across the circle within a span of 1.5 seconds, what is the maximum cord length that you could traverse within the span of that time?

Or rather – can a zergling run past a widow mine without blowing up?

This was a problem that StarCraft players have been collectively tackling and discussing after witnessing top-notch professional gamers compete in the Major League Gaming Winter Championships 2013 – one of North America’s premiere StarCraft competitions that draws the best players from all over the world.  The winner, StarTale_Life, took the championship and awed thousands of spectators with his confident victories over the world’s best StarCraft competitors.  But how did he make it look so easy? 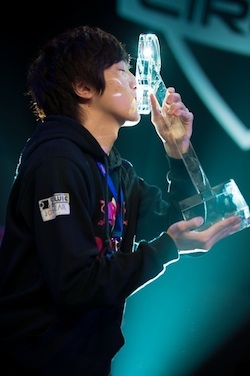 StarCraft is a real time strategy game where players assume the role of a commander, who has a top-down perspective of a battlefield and controls the movement and individual units.  Each unit comes with a unique role and special abilities, and thus when new units are introduced – strategies and metagame change. With each release of a new StarCraft expansion (an update and add-on to the original game), players experiment with new units that are released.  As an analogy, imagine if the game of chess received updates where new pieces are introduced on a regular basis.

In the current expansion (Heart of the Swarm, released March 12, 2013), one of the new units, the widow mine, is a robot that burrows into the ground and fires a projectile at a target that comes within its circle of activation.  The projectile only fires 1.5 seconds after locking on a target.  Again, the analogy to be drawn here is the unit functions like a normal mine (works only when stationary and underground) except it can be used multiple times.

It has been incredibly effective against opponents, except for StarTale_Life – who seemed to be immune to the mine’s effects during his championship run at the MLG tournament. Life’s units were traversing through the mine radius, so what was he doing to avoid activating the mine that other players did not realize?

Thus, the StarCraft community worked out a theory – through forum discussions that ended up looking a lot like a textbook math problem.
How can you avoid activating a widow mine while running through its activation radius?
The answer: by finding the maximum cord length of the circle that you can run across in the span of 1.5 seconds.

Even though this may be elementary math terminology, it still can be jargon for those who have not brushed up on basic geometry.  So contributors to the StarCraft community re-interpreted how to better communicate the solution. 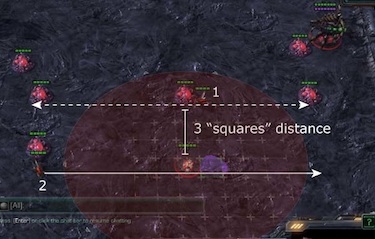 Images such as the one above were submitted by community members in order to help explain the newly found skill that would assist players in their gameplay.  Numerous iterations of the ‘widow mine solution’ were re-drawn and distributed among forum members. 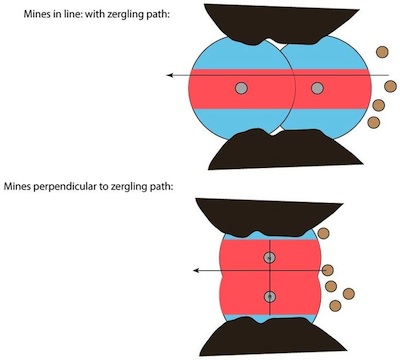 Taking the investigation further, how could widow mines be placed to increase their area of effectiveness?  The discussion also delved into how to effectively place widow mines, and utilized basic principles of geometry to again illustrate the skill to players. 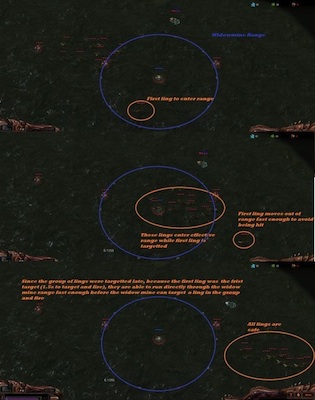 Pictures were even created to not only explain the concept of dodging the projectiles, but also how to control their units in such a way to dodge the projectiles. Annotations within the images attempt to notify the player where to click and pay attention when controlling a multitude of units across enemy territory.

After much discussion, the theories were put to the test in the game – and the experiments were recorded, uploaded, and shared on YouTube.

Pictures, text, and video were originally framed through an academically-oriented perspective – a geometric solution on solving problems within the game.  To assist others who were not too familiar with terms from geometry, social support from the community allowed for other players to recontextualize the problem and solution in a way that they could understand through their interests, without diluting the academic relevance.

Players teach each other by reframing, remixing, and reinterpreting new knowledge they obtain from observing professional play and from the gaming performance of experts.  A rather complex technique developed at high levels of competition is taught to the community not by the professionals themselves, but by other interest-driven community members.

While reframing problems in a more interesting setting is not a new practice, this is not a case of ‘chocolate covered broccoli’.  The academic relevance is used in service to solving interesting problems that arise in the community, and provokes a sincere form of engagement among players surrounding both the content of the game and the academic content of the solution.

Within StarCraft, we’ve seen players who may not consider themselves teachers or mentors, but still practice coaching and mentorship in the community.  The interest-driven nature of the community, along with a desire to improve and compete, continues to drive collaborative problem solving and peer-supported learning through participation in these types of strategy discussions.