BBC Interview Dad, and the Joys and Perils of Parenting on the Internet

Alicia Blum-Ross takes a closer look at the infamous ‘BBC interview dad,’ and the representation of parenting on the internet to explore the delicate and unique balancing act of those families who achieve unintended viral success. Alicia is a researcher at the LSE’s Department of Media and Communications. In addition to her work on the Parenting for a Digital Future research project, she is interested in youth media production. 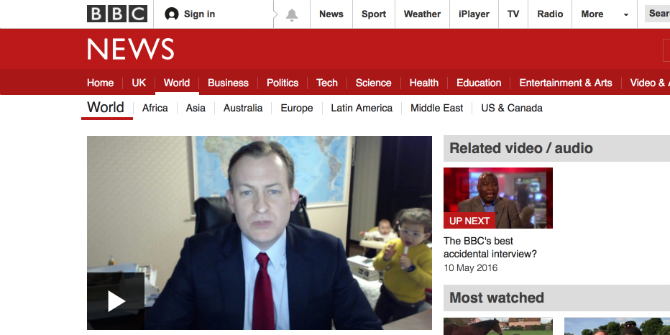 Unless you’ve been living under a rock (or doing a “digital detox”) you surely have seen the imminently relatable video of academic/dad Robert E. Kelly, an Associate Professor at Pusan National University in South Korea, whose very serious BBC interview was adorably interrupted first by his young daughter, then his infant son, then his wife scrambling to collect the interlopers.

The clip has also occasioned some controversy. First – why did so many viewers assume that the mother was the nanny? Second – why did Kelly, albeit mirthfully, try to push his daughter out of the frame instead of engage with her? The first critique is apt, and speaks to the persistence of stereotypes of Asian women and indeed White men… (Although for my 2 cents I still can’t believe that anyone who saw that final heroic arm reach could think she was anyone other than Kelly’s partner). This casual racism has already been analysed extensively.

The second critique gives us insight into both the perils and the potential of representing parenting on the internet. There were practical reasons for his somewhat staid parenting manoeuvre – Kelly has since revealed he was wearing jeans below his interview suit and so did not want to stand up – but that does not keep an army of “keyboard warriors” from commenting on the warmth (or lack thereof) of Kelly’s approach.

That this clip has chalked up millions of views is not especially surprising, given that cute kids + hapless on- and off-camera parents + unintentional physical comedy = a long-standing formula for viral gold. We need look no further than the early success of shows like America’s Funniest Home Videos to see how audiences relate to capturing of unscripted but deeply human family moments. Yet the “spreadability” of social media lends a new form of what Baym and boyd call “socially mediated publicness” to these silly but very entertaining videos.

The potential public for Kelly’s interview extended far beyond the originally intended one – moving from perhaps thousands of BBC viewers interested in the impeachment of the South Korean president to millions of multi-platform social media users who were interested in having a chuckle. Many of these were parents – like me – who sometimes work from home and who praised the interview for revealing something of the texture of what it is like to balance working and parenting in the same space.

As we’ve discussed before, “sharenting” or sharing the experiences of parenting online can bring great joy and invite others to share in the intimacy of what is both individual, and also highly universal. There are concerns, however, that if parents share too much they may be determining their children’s “digital footprints” and opening themselves or their children up to critique.

Although Kelly did not share the video himself, and he and his wife seem slightly bemused by the whole thing, it demonstrates how the “collapsed contexts” of the internet are both opportune and perilous. Kelly was acting intentionally in his professional capacity, and unintentionally also acted as a parent. This opened up in many ways welcome discussion about racial stereotyping, parenting, and the delight and frustration of kids being kids, but it also led to some at least momentary discomfort for Kelly and his wife. We also can’t really know what ramifications it has had for his children, now or in the future.

Robert Kelly and Jung-A Kim have now issued a statement, clarifying some misunderstandings, but also demonstrating the delicate and unique balancing act of those who achieve unintended viral success. Their ability to respond to the clip is also one of the unique potential properties of democratized social media – people can follow Kelly on Twitter and now get information straight from the source. Their response shows how those who are churned unexpectedly through the mill of social media alternately attempt to laugh at themselves, respond (but perhaps not to much) to critique, and try to meet the needs of millions of voracious viewers, but also experience some professional and personal worry and embarrassment. The father of the boy whose post-dentist visit was viewed millions of times describes going viral as being in “a really lonely place,” although he then parlayed the viral video into later financial benefit to his family.

This episode will probably fade quickly into the annals of the internet and there’s every possibility that this will actually help Robert Kelly’s professional career (if the BBC does not use this guy for every relevant East Asia interview for at least a little while they’re missing a trick).

If we assume – and this is an assumption – that no lasting harm comes to Kelly or his family from having appeared in this video, I can’t help but find the video a welcome example of what social media can do well – engage, entertain, and occasion important conversations about aspects of the world that too-often go unnoticed. The digital age offers parents ample opportunity to share and compare experiences, whether sought out or not, which seems some cautious cause for celebration.