In previous blog entries, I have talked about designers in fiber crafting. In this entry, I will share one designer’s story of how she moved from learning to knit and crochet to eventually become a designer. Through her story we can see how the online community of Ravelry has played an important role in her becoming a designer. 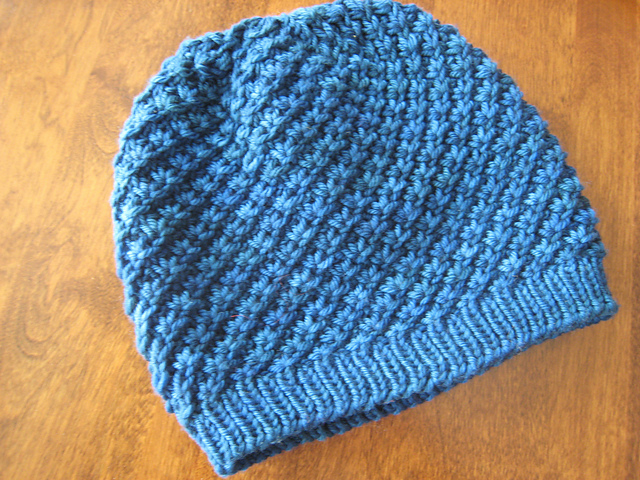 Amy is 17 years old, homeschooled, and lives in Colorado. She is the author of four knit and two crocheted patterns, and she has made over 180 knit or crocheted items. One of her patterns is a hat inspired by the sixth Harry Potter movie: Harry Potter and the Deathly Hallows: Part 1. On Ravelry, over 1100 people have added this pattern to their “favorites” list, over 400 people have the pattern in their queue of things to make, and nearly 200 people have already started projects using the pattern. This one pattern has already earned her more success than many other pattern authors experience.

Amy’s grandmother taught her to crochet, and Amy’s younger sister taught her how to knit. When Amy first learned, however, her grandmother visited infrequently, and Amy did not know how to read patterns. She began freestyling the items she wanted to make, using the stitches she knew to make hats and blankets. The sisters sent the hats they made to their grandmother, who would donate them to hospitals for preemie infants.

Eventually Amy and her sister began crocheting more, her sister began knitting and taught Amy, and the sisters also learned to read patterns. Knitting and crochet patterns are similar to recipes: items are broken down into rows (or rounds if the item is round like a hat), and the pattern gives precise instructions for which stitch and how many to do on that row. Stitches and techniques are abbreviated, so a knitting purl becomes “p” and single crochet becomes “sc.” As an example, a pattern row may read “*sc in 5st, inc* across.”  This would mean “*do a single crochet in each of the next five stitches, then do an increase in the next stitch* and repeat what is between the asterisks until you come to the end of the row.”

After learning to read patterns, Amy discovered two sites for knit and crochet patterns. However, the sites were quite limited in the types and number of patterns they had. Unable to find patterns for things she wanted to make, Amy started intentionally designing items.

Through a crocheting friend, Amy learned about Ravelry. Ravelry offered not just patterns like the other two sites that Amy knew about; it also had tools to organize supplies and a community of people who shared the same interest in fiber crafting. In Ravelry, Amy even found other knitters and crocheters who loved Harry Potter.

The community aspect of Ravelry was a big draw for Amy. She knows a few people in person who knit or crochet, but Ravelry opened up an entire community to her.  Through the groups, Amy chats with other fiber crafters about personal life and knitting tools like yarn ball winders. She even gets to help out other designers with their knitting. Through the community, Amy found a social connection with others who share her interest and support it, encouraging her to fully participate not just in the community but also in her fiber crafting. Her knitting and crochet really took off as she was inspired by the projects she saw from other fiber crafters and under the “hot right now” section of Ravelry.

Amy’s participation on Ravelry also began influencing her designs. Whereas the first knitting and crochet pattern websites had inspired Amy to design because they had so few options, Ravelry has been inspirational because of its wealth of patterns. Interestingly, for the same reason, Ravelry has provided a challenge because so much has already been done. Amy admits that,  “I have to push myself to design instead of going straight to the patterns tab and finding hundreds of patterns ready to knit or crochet.”

Despite this challenge, Amy has really advanced in her designing. As I mentioned in my last blog entry, sometimes it is the abundance of creativity that really pushes designers to come up with something new. Amy is pushed to find things that have not been done before and will be loved by others, and she is quite good at it if measured by the success of her patterns.

Amy has put a lot of effort into how her designs should look – not just as products but also as patterns. She is learning about and acquiring new skills related to pattern authoring, including creating graphics, taking pictures, and formatting the pattern for publishing and sale.  A bare-bones hat pattern may only take about half of a page, but many designers like Amy go above the minimum information needed for a pattern because they hope that crafters of all experience levels can successfully create the hat from their pattern. This means that in addition to the actual pattern, designers include details like yarn weight, hook size, and gauge (number of stitches per inch). They may also explain what abbreviations mean, explain techniques or uncommon stitches, provide images of the end product, give tips on how to make the end product look the same as that of the designer, and provide tutorials (including images) for difficult aspects. After all of this is added in and formatted, a complete pattern for a hat may wind up being two full pages for one size option.

In addition to further her pattern writing skills, Amy has even become interested in blogging about her pattern designing to reach a wider audience. Ravelry has a feature that allows her to attach her blog to her Ravelry account, allowing her Ravelry fans to also follow her blog. Through participating in the production centered community of Ravelry, Amy has been exposed to the level of professionalization and ease of use that many designers and knitters look for and desire in patterns.   Amy’s designing has moved from freestyle crochet to creating designs out of necessity to a more professional level of designing, using tools and platforms to polish her patterns and expand her audiences.

Figure 2. An excerpt from Amy’s pattern, with carefully placed images and text that offers clear and concise instructions.

Outside of Ravelry, Amy’s fiber crafting interests have become a family affair. Amy’s sister is also an avid knitter and crocheter.  Amy told me,

“My sister and I have a total blast knitting. 🙂 We like to joke that we pick projects just to try to outshine the other. Of course that’s not completely true! We have a lot of fun oohing and ahing over what the other picks to work on next as well as diagnosing & fixing problems and deciding the best step on a new design.”

The sisters have also taught their mother to crochet. Even their dad has purchased a set of knitting needles and some yarn and asked the girls to teach him to knit. Fibercrafting started as an intergenerational activity between the girls and their grandmother, but now it also spans their parents’ generation as the girls have become teachers to their parents. Amy and her sister have also taught a few of their friends to crochet, and their crafting motivated another friend to take a knitting class at her school.

Amy’s dad has even taken on an active role in Amy’s designing; he is trying to help her gain a larger online audience.  Matt’s recent blog post about fashion camp explored the role that mentors and parents take in helping youth solve problems via online resources. Amy and her dad are another example of this intergenerational problem solving. Together, they have discussed the blogging platform that Amy originally tried and the things they dislike about it. They have looked into getting a WordPress blog for Amy, and Amy’s dad has even offered to create a simple site for her to use for her pattern authoring. Here we see both Amy and her dad drawing on their areas of expertise (Amy in fiber crafting and her dad in computer programming) to collaborate in this shared purpose of Amy’s designs. The morning of one exchange I had with Amy, her dad was considering getting her Adobe Illustrator so that she could use the program to create graphics and a logo for her designs and blog.

Amy learned to crochet and knit from her family, and when she found the crochet and knitting pattern websites, she found new patterns and also began designing. But it was the discovery of Ravelry, and the online community of fiber crafters there, which really helped Amy further her design interests. Through Ravelry, she found a community that shared her fiber crafting interests and offered her peer support and inspiration to advance those interests and grow as a designer. Because Ravelry is openly networked, Amy was exposed to and became interested in taking her designing to a public level where she could gain recognition and an audience for her work, and her father has offered his skills and expertise to help her design. Fiber crafting has become an intergenerational activity that the grandparents, parents, and youth could do together. With and through Ravelry, Amy’s interests, family, and online community intersect and overlap in ways that have truly broadened her knowledge of and opportunities in fiber crafting.