Beyond Digital Immigrants? Rethinking The Role Of Parents In A Digital Age

Do parents find the new digital age a frightening place to be? Sonia Livingstone considers recent media stories and what might really be going on in family’s homes. Sonia is Professor of Social Psychology at LSE’s Department of Media and Communications and has more than 25 years of experience in media research with a particular focus on children and young people. She directs the EU Kids Online project and is the lead investigator of the Parenting for a Digital Future research project.

Is anxiety parents’ main response to new media? From the popular press one might sometimes get this impression. Yet a recent US survey of parents of 6- to 17-year-olds by the Family Online Safety Institute (FOSI) found that parents are actually rather positive about the internet and other digital technologies:

This is heartening, given the deluge of media panics about internet risk and exploitation. While technology brings benefits as well as harm, what makes it so difficult to manage is precisely that it intensifies both. 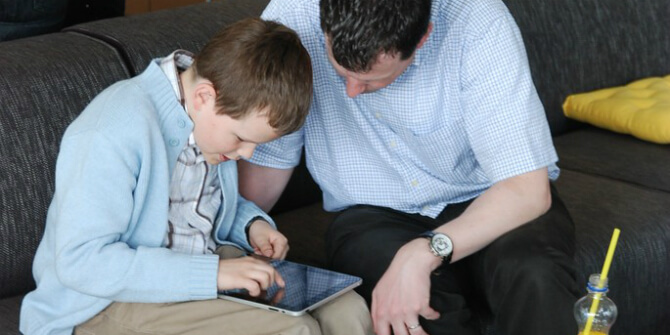 These findings also offer a counter to the pessimism of the popular idea (perhaps myth) that while children are digital natives, at home with technology, parents are digital immigrants, struggling to understand and keep up. Some who critique this idea point to the lack of evidence that children are so media savvy, and to the variety of meanings of what it even means to be media savvy in different contexts worldwide.

But less attention has been paid to the fact that parents are not – or at least not any longer – digital immigrants. As time passes, more parents have also been born into the digital age. Now, only 1 in 3 British children say that it’s very true that they know more about the internet than their parents, and only around 1 in 10 say this among younger children (often with younger parents).

There could be a generational shift in the making. It’s time to rethink digital parenting and to leave behind what we might call the ‘deficit model’ of parenting. Digital parenting is no longer all about what parents don’t know, or what they are failing to do, as I argued in the last annual FOSI conference. As Alicia Blum-Ross has commented, parents are themselves increasingly confident users of technology, accessing the digital world in their own lives for work, keeping in touch with friends, to find communities of support, to play games and to enjoy.

So there is a strange disconnect between the warnings and advice given to these parents (to be wary, to be vigilant) along with a host of safety apps targeted at them, and their own digital expertise and activities, including ‘sharenting’. And more reason to find answers to parents’ ambivalence and uncertainties regarding the benefits of the internet for their children – as parents learn more about the internet, it doesn’t necessarily mean they wish to pass on this knowledge to their children, or that they know how to.

Parents’ views of the digital potential

In our research on parenting for a digital future, we have interviewed a diverse range of parents, with some very different ideas about the potential of the digital for their children.

Peter, the father of two tech-savvy boys learning digital media design and editing skills, told us he encourages the learning of such 21st-century skills because:

Jobs for life is long gone, to be honest… I think what gets you on [is] if you’re flexible, and you will try your hand at different stuff, and you’re not, oh I can’t do that, I can’t do that.

In other words, facing a precarious future, digital skills increase adaptability to whatever may come, maximising children’s chances of getting on. Dani sees things similarly, although she’s even more excited:

I’m excited about the digital future… Yes, I’m really excited. You’ve got the Microsoft HoloLens stuff that’s coming out with Windows 10; that looks awesome… Work’s probably going to become a lot more fluid… And the kids have to do it for themselves, they, and you’ve got to be responsible for your own career.

While Peter supports his sons by finding the right classes and transporting them there, Dani is more thoroughly engaged, sharing a passion for ‘tech talk’ with her 12-year-old son, and we listen to their enthusiastic chatter, each seeming to outdo the other in both geeky energy and expertise.

Anna, a single minority ethnic parent bringing up her children in a deprived neighbourhood, sees little fun in digital technologies. But she, too, has reinvented herself in support of her children, extending traditional school-based learning into the home in a thoroughgoing and steadfast manner:

I have a whiteboard and … you know, the entry to secondary school when they do the non-verbal and verbal reasoning? So I photocopy this… These are the questions … they’ll work it out and they’ll mark their answers and then I’ll mark them after so I’m like a teacher.

These parents have adopted rather different everyday theories of learning in the digital age, perhaps influenced by the diverse pedagogies adopted by educators. Other parents – even though highly skilled themselves – don’t understand or know how to support their children’s learning.

Natasha is a digitally-competent professional, and yet she is bemused by her geeky son Jasper who, at 12, has his own YouTube channel where he posts the ‘intros’ and ‘outros’ he makes for other people’s videos and promotional content. She’s got the message about banning services for safety reasons, but that doesn’t equip her to empower her son:

He’s not allowed Twitter. He’s not allowed Facebook. I have parental controls so far… I don’t enjoy any of it pretty much. And I don’t understand most of it. But I, sort of, want to understand what it is that he’s posting on YouTube… But he can get obsessive … and I feel overwhelmed occasionally. I just think, how do I handle this?

What we have learned

So far we have only interviewed 65 families – and there are many more stories to be told. But even from these few instances, it seems clear to us that:

But parents lack collective solidarity or mutual support, are often competitive with each other, and worry about the critical judgements of others. And even though they are increasingly digitally skilled, they find it hard to engage with their children’s educators, and often do not seek online support, leading us to wonder whether it’s possible to ‘design in’ better connections to and for parents.