As a CLRN Research Fellow, I spend a lot of time thinking about Connected Learning and what it means for schools.  At its core, Connected Learning is about equity and empowering students to become change agents in their communities now, and not just when they reach adulthood.  But what does connected learning look like in practice, in a school setting?  To gain some insight on this question, I have spent the last couple of months observing schools that are trying to integrate connected learning principles into their curriculum and organizational structures.  In this post, I want to highlight one learning activity—Boss Level—that the public, middle school named Excellence Academy,1 implemented in order to foster Connected Learning.

Excellence Academy borrowed the concept of Boss Level from the New York public school, Quest to Learn. The original concept of Boss Level was inspired by the leveling mechanic used in many popular video games. In games such as Mario Brothers, World of Warcraft and Super Metroid, two levels of bad guys exist—the minions and the boss. 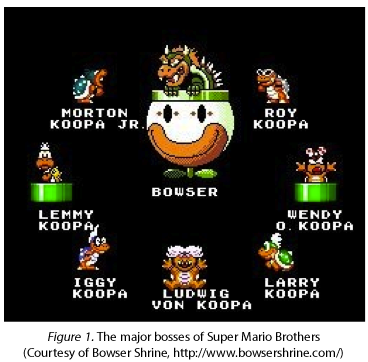 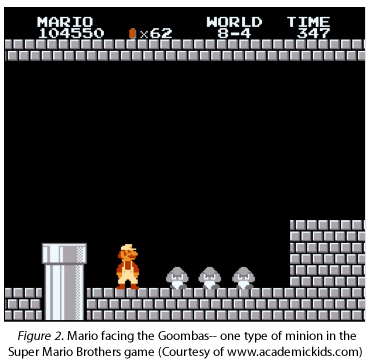 The distinction between the two levels of bad guys is based on two traits—1) how difficult it is to vanquish the bad guy, and 2) what occurs after the bad guy has been vanquished. Minions are relatively easy to kill, and usually require a simple skill to eliminate them (e.g. jump on top of it, shoot it, blast it with a magic spell).  The purpose of minions is really to provide players with learning opportunities to master core skills and strategies.  However, whether or not a player kills a minion does not prevent the player from progressing in the game (although it can make it more difficult). Therefore, the player can be choosy about which minions to vanquish.

Bosses are different.  Players cannot move forward to the next level or win the game without vanquishing the Bowsers, the Mother Brains, or the Ganondorfs of the game. 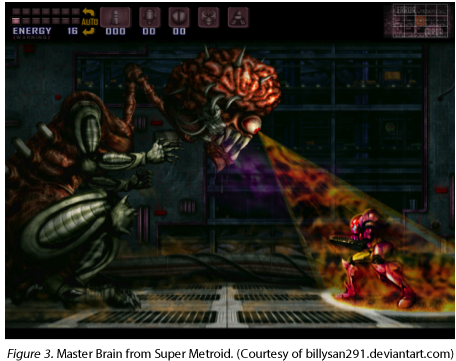 To defeat these bosses, players have to master several skills, strategies, and resources before entering the epic battle.  Bosses can be thought of as a type of built-in assessment that provide players with feedback about how well they have mastered the game up until that point.  In encounters with bosses, players demonstrate their expertise.

Excellence Academy (following Quest to Learn’s lead) took this leveling mechanic in video games and applied it to their end of trimester, student-capstone projects.

Like the video game concept of the Boss, Boss Level at Excellence Academy is designed to be an activity where students perform their expertise to overcome a difficult, school-wide challenge. Boss Level consists of three main segments: 1) Workshops—which are teacher-led seminars that review relevant skills, including design thinking and collaboration 2) Student Work Time—during which students (without the direct influence of teachers) decide and coordinate the activities necessary to implement their approach to the task, and 3) the celebration—which is a community-wide assembly where students, staff, parents, and other members of the community come together to reflect on the process and learn which teams have vanquished the boss.

Figure 5. The activity timeline of Boss Level. The time given to each task changes based on the complexity of the Boss Level Challenge.

A critical component of boss level and the connected learning story is community involvement.  There are three times when judging occurs during Boss Level (Figure 5). The judges are parents, industry experts, researchers, and other professionals who may have expertise on the boss level activity. At the start of Boss Level, students are given the judging criteria for all three rounds of judging.  Providing this information makes it clear what demonstrations of skill or knowledge are necessary to overcome the Boss Level challenge. The first two rounds of judging serve to provide students feedback on their approaches.  It also gives students the opportunity to ask questions of relevant professionals.  These initial rounds of judging are a critical part in helping students revise their approaches to the Boss Level challenge.  Students can use the feedback provided by the judges to evaluate and improve on their designs.  The final judging determines which student teams overcome the Boss Level challenge.

The Boss Level Challenge for the 7th graders at Excellence Academy was to create a short video that answers the essential question, “How do you challenge a system to bring about change?”  The prompt was selected to encourage students to conceive of themselves as change agents, and as change agents, to think about the various tools and methods available to them to alter an unjust system.

Students, working in teams of 10 to 15 students, had four days to complete the challenge.  This meant, in four days, students had to learn about the digital video production process (e.g. the difference between a director and a producer), assign project roles, generate a script, videotape their stories, figure out the video editing software, and coordinate all these moving parts in a timely manner to produce a quality product.  In addition to all this, students had to incorporate two rounds of professional feedback from the judges. Boss Level was definitely a challenge.

During Boss Level, I had the opportunity to serve as one of the eight final judges.  As a judge, I went to each of the four classes that I was assigned, watched the videos, asked questions, and then typed my final scores into a form on an iPad.  Overall, the quality of the work (taking into account the time pressure and all that the students had to learn) was very good.  Students incorporated appropriate music that highlighted the mood of their stories, used visual effects that drew the audience in, and acted out a story of their own making.  However, the storylines of most of the films that I judged didn’t quite make sense when I thought about them in terms of the essential question, “How do you challenge a system to bring about change?”  For the life of me, I could not figure out how zombies chasing survivors through the hallways of a school, or the Joker telling jokes to hostages, addressed this question.  Nevertheless, I carried on and gave my final scores to each class.  After finishing, I headed towards the assembly room for the final celebration.

The celebration was packed with students sitting cross-legged on the floor, staff roaming through the aisles, toddlers with pacifiers, parents with cameras, and elderly individuals sitting in chairs.  All were there to view the students’ videos.  The principal, Ms. Kallie, was the emcee and started the celebration by congratulating the students on their hard work and making it through Boss Level.  She also highlighted the purpose of Boss Level and why learning requires failure.  She did this by reciting stories of failures that specific students had encountered during Boss Level, and how those students overcame those failures.

After Ms. Kallie’s opening, the “Best in Show” for each of the grade levels were revealed. The Best in Show for the 7th grade group was the movie where the zombies were chasing students through the hallways.  When the zombie movie was played for the audience, students went crazy.  Laughter filled the air, students were rolling on the ground, and I heard comments such as “Why is there a monkey?” and “Look at the way Sadie is moving.”  Students were just eating up this movie.

After the videos were shown the list of classes that defeated the Boss Level challenge was revealed.  Students cheered and congratulated themselves, and then the students were dismissed for the day.

My Reflections on Boss Level

In alignment with the Connected Learning vision, Boss Level is designed to connect diverse spheres of practice into one activity.  For instance, Boss Level incorporates peer culture through student-directed collaborations,  academic life through a hands-on project that demonstrate students’ argumentative skills, and professional life by requiring students to use industry-standard techniques and roles to create a short video.

Boss Level also encourages connected learning by making community involvement an integral part of the activity. Throughout the week, parents stopped by to watch students work, local career professionals provided support and feedback to students, and the culminating celebration was open to the entire community.  This fundamental integration of the community highlights what the Connected Learning perspective means when it advocates for openly-networked environments.  Boss Level created a space for intergenerational collaboration and cross-context skill building. Unlike traditional school assignments, students never received a grade for their performance in Boss Level.  Instead, the “formal” assessment came in the form of community feedback and the students’ own satisfaction with the project and process.

Students incorporated elements such as zombies and corny jokes because they knew their audience (other Excellence Academy students), and they knew what characters, jokes, costumes, and funny dances would elicit the desired responses from their audience.  This tailoring to a specific audience is an element of professional technique used in design and film (for example, User-Centered Design), and these middle school students have already demonstrated a talent for developing a product for a specific audience. Overall, it was a great Boss Level.

[1] To protect the identity of all persons observed during Boss Level, I use pseudonyms for the school name (Excellence Academy) and all other names mentioned in this post.