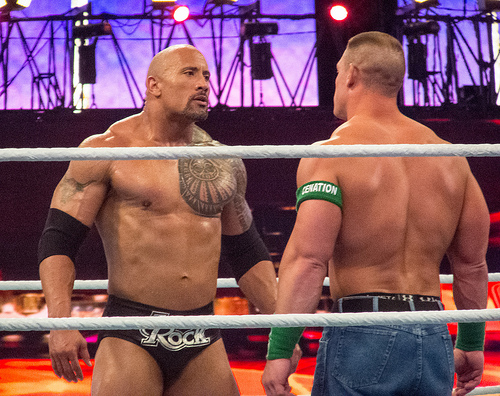 WWE (World Wrestling Entertainment) is the largest professional wrestling organization in the world, with fans across the globe. Professional wrestling has been around in some form since the late 18th century, and in something like its current form since the 1930s. Professional wrestling draws viewers across class and race, although it is most closely associated in the popular imagination with the working class. This broad base of appeal and larger youth male fan base made it an ideal community of study. One of the key aspects of connected learning is to open up more diverse pathways to reach non-dominant youth. In this case study, I am exploring the question: can an interest-powered community like wrestling open up more conduits and pathways to connected learning? Professional wrestling fans, like any interest-driven community, create and use a variety of communication methods and resources to stay up-to-date with the news of the community. In this way, they take an active, instead of passive, role in their interest.

As I hadn’t seen a professional wrestling show in more than 15 years, there was a steep learning curve for me to begin to understand the nuances of professional wrestling and the conversations of the fans who know the intricacies intimately. The WWE online community I have been observing offers community members a venue for posting on a wide variety of topics, including specific shows, other sports, and a fantasy wrestling federation (which is much like a text-based role-playing game).

Professional wrestling, like video games and other popular culture pursuits, often gets the reputation in popular media of being low-brow and a cultural and intellectual wasteland. However, just like with video games and their fan communities, this reputation could not be farther from the truth. A variety of opportunities for learning, and specifically connected learning, occur in the professional wrestling fan community. This blog post will just scratch the surface of the types of learning that occur as well as how this interest-driven community intersects with community members learning in other settings, demonstrating both full and partial moments of connected learning.

The very first participant I talked to from the community was a young woman named Maria (all names are pseudonyms, including the name of the fantasy wrestling group). She is 17 years old and in her first year of college. She has been a WWE fan for about four years, so she would have started watching just before her first year of high school. Her very first encounter with WWE was by chance: a local restaurant in her area was giving away WWE collectible cards, and her father brought home a pack for her. She said she was fascinated from the start with the cards, especially one of Trish Stratus, a popular female WWE wrestler at the time, and felt intrigued enough to watch the shows. She didn’t have a local community to talk to about wrestling, excepting her little brother who began watching with her. Her friends thought she was a tomboy for liking professional wrestling because they associated the sport with guys. This caused Maria to find another space to talk about her interest. She found Over the Ropes, an online fantasy wrestling community,  which I am currently observing. The community offered several advantages which interested her. It was a place where she felt safe talking about her interest without fear of damaging her reputation or having other negative social repercussions. She felt that being able to talk and participate with people who shared her interest in an online setting gave her freedom to completely express herself (shared purpose). It also offered the chance to explore an interest in creative writing by writing and editing for the fantasy wrestling group which was a part of this online community.

Maria had dabbled with creative writing in the past, but this was the first time she was writing for an audience and with a specific purpose.  Every week she received feedback from the community about the quality of her work both in terms of content and form. Maria confided in her writing teacher about her enjoyment and participation in this fan community; he was the only teacher she told about her interest in professional wrestling. He encouraged her to join the school newspaper, which she did, and she wrote for the paper until graduation.  She decided at college application time that she would not go directly for a degree in creative writing; instead, she decided that it was more practical for her to choose a degree as a medical technician where she could use her strong writing and and grammar skills for technical writing, and then pursue her creative writing on the side.

Maria pursued her interest in both writing and professional wrestling by her participation in Over the Ropes (interest-powered). She was able to develop skills through feedback from community members (peer-supported). Maria received feedback on the content and form of her writing from people with expertise in her area of interest, creating a space for her to pursue her interest in a strategic and skill developing way.  Through exploring creative writing in this interest-powered, peer-supported structure, she improved her skill and realized her enjoyment of it, which led her to think of creative writing outside of Over the Ropes. Her writing teacher was able to help her connect her enjoyment of creative writing to a more technical form of writing (journalism) by encouraging her to join the school newspaper (academically oriented). Through her work on the school newspaper she discovered the variety of applications possible for her well developed writing skills. She explored the different avenues of writing until she found and settled on her current path.

Rhashan is also a member of Over the Ropes.  He is 19 years old and has been watching wrestling since the age of 3, having been introduced to the sport by his mom. He is an expert in his interest, with a long memory of its history, storylines, and wrestlers. If you ask him about his favorite wrestlers, you get answers which span a decade. Rhashan has developed a web series on YouTube where he creates analysis videos of the weekly show RAW and the annual pay-per-view event WrestleMania. He displays technical skill in video and audio editing, splicing together segments of the television broadcasts with shots of him talking, and the audio runs seamlessly throughout each video. He enjoys this online community because it offers him a varied perspective on wrestling due to its diverse international community and gives him access to a steady stream of people who are interested in his filmmaking. Rhashan uses his digital skills in video and audio editing to enhance his participation in Over the Ropes, his interest-driven professional wrestling community (interest-powered). Through feedback from the community (peer-supported), he was able to improve his video scripts’ analysis as well as his video and audio production. He felt that the improvements he made in his videography skills based on the feedback of the Over the Ropes role-playing community was helping him to hone his career in filmmaking  (academically oriented). Rhashan is interested in building a larger following and connections to future opportunity, but is still working on realizing his full potential. He has not encountered a supportive mentor in school or a community program yet, but is hopeful that his YouTube channel will continue to draw followers. His is a story of connections and opportunity that could be built with the right institutional and relational supports.

These two youth were both able to connect their interest-driven interests to creative pursuits, and refine their skills with the help and feedback from their community. For them and for this activated group of WWE fans, fandom provides a shared purpose. For Maria and Rhashan, the experience is also definitely production-centered. However, as can be seen from these two example cases, the outside influence and guidance of a mentor is a key component in building a connected learning environment that will allow a learner to thrive.