In this post, I want to reflect on and share with you one of my most memorable observations as a CLRN researcher.  This episode was significant to me because it forced me to think about the ways in which Connected Learning environments can be designed to encourage students to see the value, and hopefully adopt, the connected learning disposition. The episode centered on a young Latina sixth grader named Elissa. 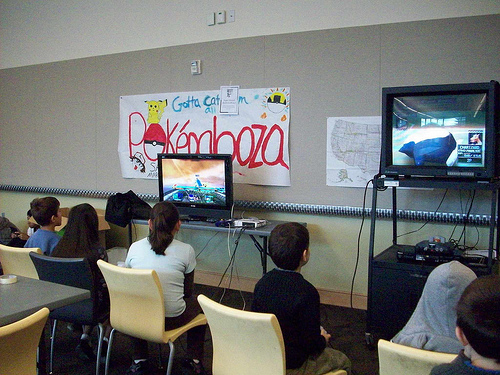 Elissa is in Mr. Ammon’s technology class, and at the time of the event, I had been observing her class for a month and a half. Elissa is an attention magnet—she knows how to grab your attention whether you want to give it to her or not. She has the impulsive habit of randomly yelling out questions, answers, and comments, even when she has not been called on, or when such an outburst is highly inappropriate. Even though Elissa is at times disruptive, her outbursts do not seem to be motivated by maliciousness. Instead, it seems like she is extremely excited about sharing her ideas and opinions. Elissa is very sensitive to what her teachers think of her. In one interaction, Mr. Ammon was giving a lecture, and Elissa began shouting out comments about other students and asking why she had to do the particular assignment. Her actions earned her a phone call home and a public admonishment. After receiving her punishment, Elissa quickly quieted down, cried a little, and then spent the rest of the time in class walking to Mr. Ammon’s desk to show him her progress (although Mr. Ammon did not ask for this incremental progress report).

The memorable experience that Elissa starred in occurred on the first day of the video game design unit.  In this unit students used Gamestar Mechanic to learn about and create their own publicly shared platform video games (Definition of Platform Game).

One successful learning strategy, used by many technical professionals, is learning from examples.  Based on this learning strategy, Mr. Ammon designed a class activity where students were asked to play and defeat a list of Gamestar mechanic games.  After completing each game, students had to identify game interactions they would like to emulate.  Additionally, students had to provide feedback to the authors.  The purpose of this activity was to prepare students to make their own video games using the Gamestar game engine.

As we might expect, many students were excited to spend class time playing video games. Elissa was one of those excited students.  However, her excitement quickly transformed into frustration as she struggled to defeat the games.  To overcome this frustration, Elissa fell back on her tried and true strategy for getting attention.  She began yelling, “I need help!”  When Mr. Ammon finally got to Elissa, Elissa commented on her long wait time, and then asked him, “How do you beat this? I tried, but it’s not working.”  Mr. Ammon looked at the game and told her to keep trying.  He informed her that it took him five times before he actually won.  Mr. Ammon gave her a clue about how to find the best path to avoid the enemies, and then left to help the next student.

Elissa did not look too happy with Mr. Ammon’s help, but she did try again.  However, almost 30 seconds into the attempt, she threw up her hands, and started yelling: “Mr. Ammon, I tried and it didn’t work.  I died again.”  Mr. Ammon again told her to keep trying.  Elissa ignored this, and loudly whined, “How do you do this?” Mr. Ammon did not respond to her emphatic requests for help.  So Elissa turned to the boy sitting next to her, Edgar, and the following conversation ensued.

Edgar: “Why does that matter?”

Elissa: “Because boys tend to play more games than girls.”

Continuing the conversation, Elissa gave her computer to Edgar, and asked Edgar to complete the game for her.  Once he finished the game for her, she took back her computer and yelled, “Mr. Ammon, I beat it!”  Edgar looked at her in accusation, but did not say a word.  Elissa just smiled.

Why was this episode so memorable?

This episode was salient to me because of the ways in which it highlighted some of the limits of instructional approaches in guiding young people to learning opportunities and dispositions outside of their existing comfort zones. Given my previous involvement in engineering societies like the Society of Women Engineers (SWE) and the National Society of Black Engineers (NSBE), I feel strongly about a minority female opting-out of educational experiences around STEM content and not reaching to realize their full potential. Despite these emotional reactions, I’ve also come to realize that young people need to have choice and autonomy in determining how they are going to learn, and that we cannot always predict exactly how a particular incident like this one will play in their evolving learning pathways.

Designers of Connected Learning environments cannot force students to value a learning approach, but they can invest in creating multiple opportunities for students to explore and pit their trusted learning approaches against the one being offered.  In the case of Elissa, Mr. Ammon offered her a chance to learn through self-directed, exploration of examples.  However, based on Elissa’s actions and words, the learning approach that Elissa was looking for was one where someone told her the exact steps to beat the game (no experimentation).  Elissa’s approach is not a bad approach to learning.  A step-by-step tutorial might actually be what she needs at this time.  However, by Mr. Ammon exposing her to this way of learning, she now has an awareness of the approach.  And that is a little step in her journey to technical expertise.

As described in several CLRN posts, many people start their journey of deep expertise in a domain almost by chance.  A student follows a friend to a library to hang out and meets other students who are mixing and constructing raps in a recording studio at the library; the student returns to the library regularly, learns mixing and producing from an older student, and later becomes the go-to music producer within that context [2].  Or a casual knitter stumbles upon a website where individuals are trading knit and crochet patterns, decides to create and share her own patterns, and ends up becoming one of the top pattern designers on that website, with over 1,100 followers [3].  Each of these individuals may have been exposed to communities that used technology to make music, or a group of knitters who used patterns online to make artifacts. A series of precipitating events such as producing artifacts and sharing ideas in these different environments makes the learning approach seem valuable or relevant to the individual, even though these individuals may have had access to these communities previously. Value and relevance around a learning approach must be something the child determines on his or her own. The role of Connected Learning environments is to create activities and opportunities that invite students to uncover and construct this insight based on their prior knowledge and dispositions.

So with all this said and done, how do we help students see the value of Connected Learning in a way that is meaningful to them? In addition to creating an accessible, production-centered, and highly-networked space, the environment must also facilitate choice. When I say choice, I do not mean just choice about assignments or who to work with.  I am actually referring to the choice of  learning approach itself.  I am encouraging designers to explicitly highlight the features and principles of connected learning, and set up learning situations where students can explicitly compare the outcomes, benefits, and risks that arise when a particular connected learning feature(s) is present in the environment and when it is not.  A quick and easy exercise could be giving students the option of seeking and recruiting mentors for collaboration on a project of interest (Connected Learning principle: highly-networked).  Several times during the project, class discussions could be held on the pros and cons of mentorship and the ways to facilitate it.  In this exercise, recruiting a mentor is an option that the environment would have built-in supports so that the students can be successful in the collaboration; however, students could also choose to work by themselves.   The multiple rounds of comparison prompted by the class discussion allow students to assess the merits of the approach, and may also serve to motivate students to opt-in (even just momentarily) and try the learning approach (mentorship) within the context and outside of it.

Providing spaces where students can make comparisons around learning approaches allow students to take ownership of their learning process, even if students, at first, opt-out of the approach being offered.  Through comparison of these benefits, risks, and outcomes, the student will be able to assign value, and hopefully see what ways the Connected Learning approach can support their personal and community goals.