Headphones in or out? (De)prioritising the social in digital media and learning

Alicia Blum-Ross reflects on recent ethnographic fieldwork for the Preparing for a Digital Future project, as she noticed striking variations in how social interaction, teamwork and collaboration are faciliated and encouraged in various digital media youth projects in the UK. She wonders whether young people’s headphones are literally or metaphorically in or out impact on their learning. Alicia is a researcher at the LSE’s Department of Media and Communications. She is interested in youth media production and is part of the Parenting for a Digital Future research project.

One worry many parents we’ve interviewed in our current research share is that digital technologies can contribute to social isolation. Parents voice concerns about hours spent in darkened rooms, playing games ‘obsessively’ instead of being outside with friends. Although some parents we’ve spoken with acknowledge the importance their children place on maintaining social relationships via technology, the more optimistic vision of children and young people as digitally enabled co-learners and peer-mentors that our colleagues in the Connected Learning Research Network have observed isn’t always obvious to parents. 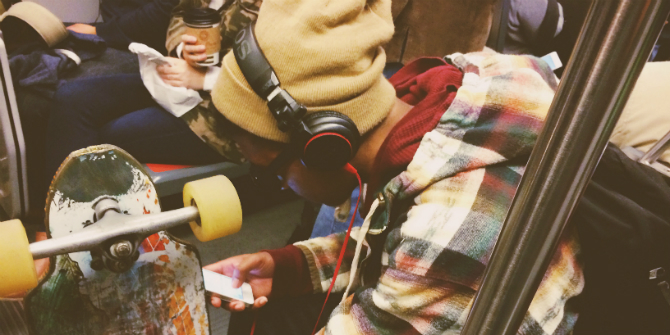 Recently Sonia Livingstone and I have been conducting ethnographic fieldwork at digital media and learning sites – from coding clubs to digital animation and music production to makerspaces. Within these sites, and thinking back to my previous research with youth filmmaking organizations, I’ve noticed some striking differences in how much emphasis is given to social interaction and teamwork. For example:

These are snippets from multi-faced, complex projects. However, even these small interactions reveal some stark differences – in the importance of collaboration, in the role of equipment, and in the types of skills and aptitudes that are emphasised. Comparing them and thinking back to worries I hear from parents, I wonder: does whether young people’s headphones are literally or metaphorically in or out impact on what and how they learn?

The extent to which a project is ‘social’ is of vital importance if the aim of the project is to gain social and communicative skills. For a facilitator I interviewed in my youth filmmaking research this was paramount. For her, ensuring ‘everyone’s opinion matters and respecting each other’s wishes… is the lesson in the whole project.’ Arguably this is especially central to digital art forms like filmmaking, which nearly always require the assistance of a creative team to realise a goal.

In the ‘making’ community working with others is also privileged. The facilitator of the prototyping workshop repeatedly encouraged the young people to compare notes and help one another, as makers often rely on each other for inspiration, to fill in knowledge gaps, or to club together for supplies, skills and space. However, while within the prototyping course there were moments of shared-learning and assistance, for the most part the support that the young people gave each other was to help complete their individual visions, rather than achieve a collective goal.

For the coding club the trajectory of coding learning was exclusively about young people developing their individual projects. Although the vision of the original MIT developers of Scratch is that of sharing and collaboration, the culture of the roll-out of Scratch in UK schools both within and outside of the National Computing Curriculum has instead been focused (perhaps wrongly?) on employability rather than social skills and collaboration.

In the three examples I described above the young people are learning many important things – from technical skills associated with soft- and hard-ware to learning ‘soft’ skills like perseverance, making creative decisions or envisioning an achievable outcome. But whether they are learning skills like compromise, negotiation or teamwork is not a given.

Educational projects need not be all things to all people, it is good practice to consider which outcomes you want to proritise as a parent or educator. However, as coding (and to some extent making) are increasingly the flavour-of-the-moment it is worth reflecting on the role of collective learning. The tech industry tends to promote individual achievement (the cult of Steve Jobs, for example), even when surely there are many examples of high-functioning teams in Silicon Valley. Given the fears of isolation that emerge from parents, and indeed from young people, that come up across our research I suggest that educators need to pay attention to the balance between headphones in, and headphones out, across all forms of digital media and learning.