India is portrayed as being on a technological par with the West, but in this blog, Shakuntala Banaji reveals the stark reality. In the context of demonetisation, she maps Indian children’s experiences of media technologies and argues that we must recognise the disenfranchising nature of large-scale digitisation of nations. Shakuntala is an Associate Professor at London School of Economics in the Department of Media and Communications. Her research in India asks in what ways diverse groups of children are participating in or excluded from communities and communications on and offline. She has written previously about the ways in which different media formats and tools are implicated in Indian children’s leisure and in their learning and formal education, and examined some of the structural issues that form barriers to inclusion and leisure for working-class children. 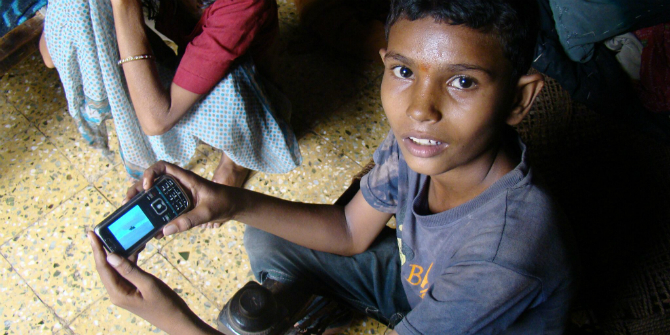 The vast majority of India’s 1.3 billion strong population – including more than 300 million children under the age of 18 – are poor, or very poor. Although politicians, research outlets and technology companies announce with pride that there are more than 900 million mobile phone subscribers in India, few of these belong to children, and even fewer to poor rural children. Many adult males in urban areas have between one and three subscriptions, and many mobiles are not internet-enabled.

To understand how many children’s everyday lives are impacted by the circulation of ideas about India as a digital success story, and the boast that mobile connectivity is almost universal, I studied the recent case of India’s demonetisation.

On 8 November 2016, with six hours warning, the Indian government announced it would be taking 80% of Indian cash currency out of circulation, the ostensible purpose being to remove ‘black money’ from circulation and to reduce corruption.

Given that untaxed income is usually held in gold, land or offshore accounts, and that the lower middle classes and the poor are mainly paid in and pay using cash, alternative explanations have been given. Millions of Indians queued patiently at banks to exchange obsolete notes. Indeed, some died in queues. Middle and high-income families used debit or credit cards, and sent others to queue for days. Hundreds of thousands of small businesses and employers couldn’t pay their workers. The families of day labourers who were normally paid in cash couldn’t buy food for their children. To counter bad press, the Indian government and its media mouthpieces circulated another narrative: demonetisation would be a good thing because it would force vast numbers of Indians, who as yet have no digital access, to use digital transactions for basic necessities. The owners of Facebook and Microsoft expressed an interest – Mark Zuckerberg praised Modi for forward thinking on digital matters. Since many don’t have debit cards – or jobs that pay electronically – and banks had too few cash machines, there was more hardship: parents were driven to the limit watching their children starve; there were suicides.

One of the aims of Children and media in India is to position the lives of children from majority social classes – the lower middle classes, the poor and very poor across the Global South – at the centre of discussions about new and emerging media.

Following fantastic work on childhood in social geography and social anthropology by scholars such as Balagopalan, Nieuwenhuys and  Katz, I mapped Indian children’s experiences of tools and media technologies they use in their daily lives. The stories include tech-savvy Avinesh (aged 15), an ardent supporter of Narendra Modi and the BJP who spies on his sister’s romantic text messages, laughs at Hitler memes and uses his online presence to circulate endless Hindu nationalist slogans.

Dissatisfied college-goers, Suchi and Kajal, have every new app on their smartphones, hang out on Instagram when they are not prepping for endless tuitions, but their friendships and love lives are increasingly fragile, besieged by painful information about ex-boyfriends and peers. Fourteen-year-old air conditioner mechanic, Gaffer confided:

Rural working children – in whose households there was often no television set and often only one adult-owned non-smart mobile phone – discussed how they had been forced to give up going to school to support their families. Midday meal schemes for destitute children are being threatened, ironically, by a vast and overinflated ideological belief in the power of technology. These children were, however, adept at using a variety of complex agricultural machinery, electronic and domestic tools.

Parents across the country have been told to get their children and themselves digital Unique Identification numbers (Aadhaar cards), or face losing access to schemes for poverty relief. Such enforced digitisation in India is being driven by three impulses. The first is an overwhelming wish to appear modern, and on a par with the West; the second is to deliver millions of poor Indians into the hands of financial institutions, banks and online marketers; and the third is citizen surveillance.

Inequalities from the offline world – of globalisation, caste and gender, religious prejudice, and poverty – are embedded and entrenched online, in technological gadgets and smart devices, but also via hype about ICT. These could, of course, be used for creativity, positive social change, emotional growth, solidarity and civic communication – as they sometimes are. Often, however, parenting for a digital future is also, and perhaps foremost, parenting in a deeply unequal present and for an uncertain future. And digital technologies are used by the most powerful for profit in ways that disempower and disenfranchise entire social groups.

What does this mean in practice?

We should be educating children to understand the ways in which corporations, and government-enabled technological systems, are currently unequal. The very metaphor of ‘connection’ is misplaced if some families are being forced to connect by governments who wish to please technology companies, but to children’s detriment. We must recognise the dangerous rhetorics and propaganda that preface and accompany large-scale digitisation of nations and economies.