On Sackboy Planet, players take advantage of the level editor’s openly networked design to collaborate on projects together. Team projects provide opportunities for people with diverse design skill sets, including logic, design, art, and music, to experiment with creative production around a shared purpose. While players may use the level editor by themselves to design their own creations, Media Molecule, the creator of LittleBigPlanet 2, included a feature in the level editor that permits more than one player to “drop in” to the level to build together. One player, Lilypod, explained how co-creation, or “online create”, works:

There is online create where you can get together and create at the same time in the same create mode…people contribute to each other’s creations. I might make something and send it to you or give it to you in the game and then you can put it in your level…it’s great if I can create a bunch of objects and then you do stuff with them and I see how they’re working for you and go back and make changes.

Although Lilypod explained the benefits of collaborative design, he also described many of the potential logistical challenges of multiple designers sharing the same project. The level editor uses features like a video editor, including rewind, pause, and fast forward, so that designers can edit their game at different phases of the game experience. Pausing the editor proves more challenging with multiple people designing at once:

When you start doing things alongside of me, I do think then that there is a limitation in terms of the whole pausing the simulation. Because when I’m designing, I work with the world paused and then I build a bunch of stuff and then I hit the run button and see what’s happening. If I don’t like something I can just rewind and make a change and then hit play again…everyone in that online session shares the same behavior, so it becomes difficult if you’re not the host to create.

Despite the level editor’s capability to host more than one designer in create mode, co-creation can have the effect of “too many cooks in the kitchen.” Without much structure for the project, designing can potentially become a logistical mess. How do players take advantage of the level editor’s capacity for group design without stepping on each others’ toes? 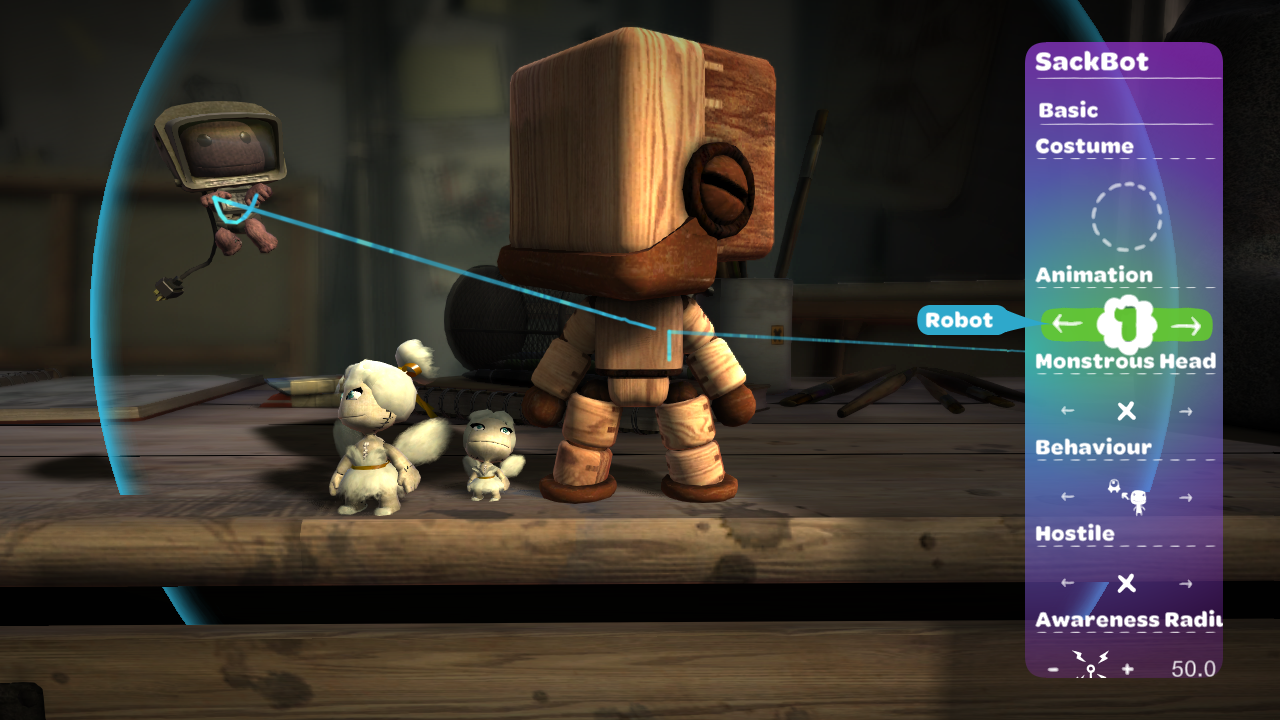 The LittleBigPlanet 2 level editor has the capability for multiple players to design collaboratively.

During my fieldwork on the Sackboy Planet forums, I found a number of examples of players creating their own structures for collaborative game design in ways that draw on the unique skill sets of other community members. In one example, a thread on the New Projects section of the Sackboy Planet forums was getting a lot of replies. The post, titled “Join Team Apple!” solicited applications from community members to participate in collaborative game design. The original poster, Makoreactor, explained that he wanted to explore the possibility of a joint venture and described who he was looking for:

Hi everyone: I’ve hit a wall with the game and want to create a development team. I’m looking for designers with expertise:

Got a good head on your shoulders? Think up enemies, level concepts, etc.!

Incredibly valuable for mood, a sound specialist would work with the brainstormer to make sure they both fit.

Makoreactor’s post continued with descriptions about the kinds of games they wanted to design (short games, uplifting themes), general strategies for design (who does what and when), and who had enlisted thus far. The over 100 responses to the post were largely excited expressions of interest. Tumblebee said, “I’m up for being a sound specialist! I can show you my work with sound on previous projects.” Another player, Flamestarter, said “I would love to be part of the team. I would be a good Brainstormer or Creator. I’m good at creating machines with logic.”

While many members of Sackboy Planet design games using the level editor by themselves (one response to the post, in fact, was a comment that “some of the best designers are solitary workers”), a number of the players I spoke with explained that they worked better with others who had complementary skill sets. “He’s good at the logic and I’m good at scenery,” said Carbonite. “I haven’t wrapped my head around most of the logic just yet.” Another player, Genome, needed music for his level and sought out a music specialist through the forums: “[Another designer] posted a thread in the Find Other Player section, stating he did music. I requested the pieces, added him, and he made the songs.” Even Sensei, an established idol in the community, said that he benefits from co-creation: “Two of my better friends in the community are very artistic. We do a lot of collaboration where they’ll pick up where I lack up in the artistic things and I’ll help them with the logic. It works in that regard.”

Responses to the thread that Makoreactor post provide a sort of history of how the team evolved. Interested designers replied to his post, and Makoreactor would post back with follow-up questions and occasionally welcome applicants to the team (“You’re in! Congrats!”). After about a week, Makoreactor edited his original post and put at the top, in bold: We don’t need any more applicants. Thank you for your interest! The result of the thread was a published level titled “Apples and Oranges,” a pinball machine-type game.

Co-creation on Sackboy Planet provides strong examples of how players can engage in peer-supported, interest-driven activities through openly networked game design. Groups like Team Apple generate a shared purpose around their projects and implement the designs through structures they generate themselves. These structures include establishing skill set categories, job responsibilities, and project timelines. Ultimately, players are able to bridge their unique design skill sets to produce team synergy and avoid stumbling over one another in the level editor.