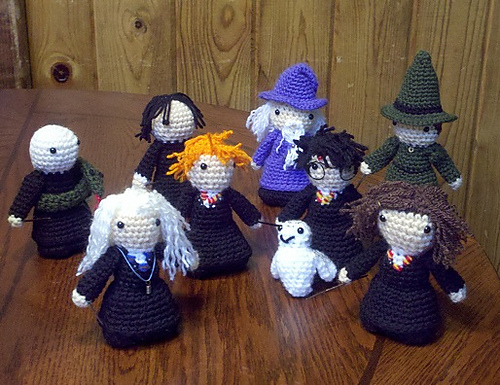 One year ago, I became a student at Hogwarts, the witchcraft and wizardry school of Harry Potter. In my introduction in the Visiting Wizards Hall, I was given my list of school supplies and told to send an owl indicating which House I’d like to join. After careful deliberation, I put Ravenclaw and Gryffindor as my potential House choices and waited for the Sorting Hat to send an owl back. Then I picked up my skein of yarn, took out my crochet hook, and decided which patterns I would use to make my cauldron and wand.

Welcome to Hogwarts at Ravelry, a Harry Potter themed group that combines fiber crafting with the fictional universe of Harry Potter. It is a group on Ravelry.com, a site for those who crochet, knit, spin yarn, and weave. Ravelry provides both a database and social network for fiber crafters. To date, Ravelry is home to over two million members and hosts nearly 25,000 groups. These groups are discussion board-based and vary greatly in their focus and number of members. You can find groups for beginner knitters, fans of the retail chain Anthropologie, Etsy shop owners, parents whose children were born around the same time, and fans of various popular media such as Harry Potter.

Hogwarts at Ravelry has 1100 members and is one of the larger groups for fans of Harry Potter on Ravelry. Its members are predominantly women who range in age from 11 to their mid-60s and have varying degrees of expertise in fiber arts. Some members are just learning to knit or crochet while others are working on publishing a knitting book. It is a group founded on the two shared interests of Harry Potter and fiber crafts. Together, these interests drive their shared purposes of crafting and creating a fictional universe through narrative and those crafts.

Fiber crafts can be found throughout the Harry Potter books and movies, so it is not surprising that the two interests make such a perfect match. Throughout the books and movies, you can find knit or crocheted items in characters’ (2) outfits and room decorations. Dumbledore professes his love of knitting patterns in Harry Potter and the Half Blood Prince, Hermione knits hats for House Elves, Mrs. Weasley knits her children sweaters each year for Christmas, Ron Weasley has a different knit blanket on his bed in nearly every movie, and even Luna Lovegood wears a crocheted sweater in the movies. Finally, we can’t forget the famous House scarves that every Hogwarts student wore and every Harry Potter fan wanted to own!

The members and administrators of Hogwarts at Ravelry use narrative, images, activities, and the design of the group to create their own fictional Hogwarts, where members become witchcraft and wizardry students. Students are sorted into Houses, which have “Common Rooms” in threads on the group’s discussion board. They use the private messaging system of Ravelry to send “owls” to other students and staff. Students attend classes in forum threads, using crafted items to turn in assignments. Additionally, Hogwarts at Ravelry members are able to join the Order of the Phoenix and use projects to fulfill their training and carry out missions for the secret wizarding society. Crochet hooks and knitting needles become tools of sport as students craft quaffles and snitches to score goals in the wizarding sport Quidditch. At stake in these activities and competitions are badges and points – which determine the winner of the House Cup.

Members of all ages and experience levels craft, chat, and work together to create the fictional world. Teenagers teach stay-at-home moms how to do a Tunisian style crochet stitch, grandmothers role-play with college students, and several hundred members all work together to create and sustain the imagined world they’ve created through crafted items and stories.

In addition to Hogwarts at Ravelry being a prolific production centered and peer supported interest group, many of its activities create or encourage educationally relevant learning. These activities foster skills such as writing and research.

Beyond fiber crafting, the members of Hogwarts at Ravelry craft their world through narrative. They create (sometimes elaborate) stories about how their crafted item fits in with a class or theme, and they role-play with each other as they score in Quidditch or explain “real life” events in their House Common Rooms. Having a case of nargles is a valid reason for missing an assignment.  Members can also participate in the role-playing Dark Mark Game, where they become Order of the Phoenix members or Death Eaters and attempt to figure out who amongst them are spies. And role-play is even used in the metadiscussions regarding the structure of the group: the Headmistress of Hogwarts at Ravelry invokes Umbridge (from the fifth Harry Potter book) to explain the group’s rules.

Students of Hogwarts at Ravelry are also encouraged to learn more about the universe of Harry Potter through research. They are given essays and quizzes asking about various aspects of the books, movies, or meta-universe of Harry Potter (sometimes found through J.K. Rowling’s other works or her recent website Pottermore).  These essays may require them to learn more about the giants in the Harry Potter universe or the politics of goblins. If students don’t readily know the answers to these assignments, they are encouraged to research the topic by “casting the Google spell”or refer to popular Harry Potter fan websites and wikis.

But the assignments and activities are not just related to Harry Potter. Some assignments have asked students to identify stars and constellations on sky maps, during which students realize the connection between astronomy and Harry Potter characters. Other assignments ask students to research Irish folklore to learn about mythical giants outside the Harry Potter universe. And past monthly competitions have asked students to create items to donate to charities, partner with other members in a spirit of unity, and even learn about heart disease and healthy activities.  Here we can see how Hogwarts at Ravelry provides an openly networked environment where students are drawing upon, reinforcing, and expanding the skills, knowledge, and learning from other areas of their lives.

Finally, Hogwarts at Ravelry provides a “home” of sorts to its members; a place where they can find support and motivation for their crafting, mentors for learning new things, and friends who go beyond the yarn, needles, and wizarding hats. It is the social aspect of the group that keeps members engaged and coming back to learn and do more. As the Hogwarts member jen2291 tells me, “Women in particular have needed, enjoyed, and thrived with these sorts of communities.  It’s so much more than just a crafting group.”