This is the first of a series of posts I plan to contribute on how connected learning relates to my own everyday life as a parent, and what I am learning from my own kids about making, learning, gaming, and online communication. Clearly the role of parents, siblings, and other caregivers in the family is critical to supporting, directing, or impeding connected learning for young people, and it can be a challenge to get a view into these micropolitics of the home. Even when we’ve done home visits and interviewed parents, we don’t necessarily gain a lot of insight into those small everyday interactions, tensions and joys of family life, whether that is gaming together, negotiating the demands of homework, or curating summer and afterschool activities. With my kids’ permission, I’d like to share some of the stories of my own growing up as a parent with two teenage kids. First up is a journey of hacking and learning that my twelve-year-old son has been on. I had the good fortune to be along for the ride.

A few months ago, my son started talking about wanting to mod his Nerf guns. It turns out this can require some equipment to accomplish, which is why Dad and I were being recruited into the effort. Upon questioning, he says he first learned about Nerf gun modding from a friend, whose tech savvy dad helped him with the modding. After this peer-driven introduction, my son had turned, as he often does, to the Internet for more answers. There he found a robust community of Nerf gun modders who fueled his ambitions. These ideas were on the back burner for a while, mostly due to parental neglect, but were reignited through another peer trigger–an upcoming birthday party for the same friend who introduced him to Nerf gun mods. And this party would most certainly feature Nerf gun warfare. Clearly the time was ripe to mod one of his guns to give it more range than the off-the-shelf version. 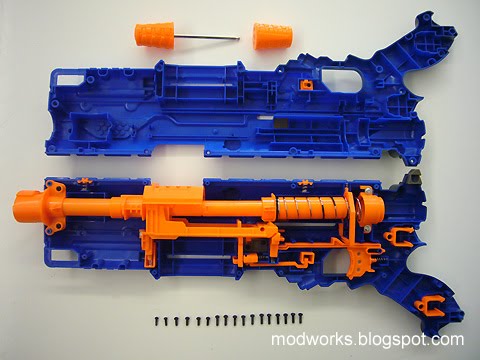 After assuring me that a Nerf gun blog post he found had detailed instructions that he could follow with tools on hand, one of his guns was quickly dismantled, the parts strewing his desk, which is normally devoted to schoolwork. The Internet was key to his investigation, which meant that the activity had to happen by his computer, and not upstairs where his tinkering usually took place. Getting under the hood, I’m impressed with what a fantastic object of tinkering a Nerf gun is. They are easy to take apart, and the mechanisms are fairly intricate, but transparent. Even with a relatively complex gun, which cocks and reloads, one can begin to figure out how one thing triggers another by messing around with the parts. After some “help” from Mom in dismantling and reconstructing the gun, we managed to strip one of the screws and couldn’t take it apart again to keep tinkering. Insisting he knew what the problem was, my son retired for the night to await a Dad-level intervention in the morning.

In the morning, Dad identified pliers to remove the stripped screw, and tinkering re-commenced with Mom’s occasional help in the gaps between running errands, laundry, and driving to and from art classes. The time of the party came and went, but still the gun wasn’t working properly. Defeated, at least for now, he headed to the party without the modded gun. The next day, he enlisted Dad into troubleshooting, and after finding a different set of instructions on Instructables together, they figure out that there was one missing step. The Nerf gun can now shoot with double the range, guaranteed to give a critical edge in the next combat opportunity.

War and weaponry are generative sources of narrative, gear, and shared purpose that are ubiquitous in the lives of most boys. Starting with mock battles with Lego-brand swords, and moving on to Pokemon battles, chess, strategy games, laser tag and Nerf gun wars, my son and his friends have continued to mine these familiar set of referents for shared play, competition, and creative production. Nerf gun modding is just the latest in a long and winding trajectory of interest development that is supported by robust peer and commercial culture, given an extra boost by burgeoning communities online.

While some parents might object to guns and war being the focus of interest-driven learning, given the right frame and supports, I believe that it is possible to mine even combat for sources of creative production and intergenerational connection. War games like chess and StarCraft provide rich opportunities for strategic thinking and problem solving, and the promise of a Nerf gun war can fuel the drive to make and tinker. The story of our weekend of Nerf gun modding illustrates some of the generative forms of problem solving and creative activity that can be driven by peer culture which may not seem immediately learning-relevant. It also illustrates the wide diversity of resources and supports which can be mobilized to support a specialized DIY modding activity. A shared peer activity and content world fueled my son’s self-directed making activity, which was in turn informed by a wealth of online resources and parents who rallied in support.

More recently, the saga has continued with rubber band gun construction inspired by active communities of K’nex builders on Instructables. I’m glad that he has many other interests other than guns and war, but I’ve also found it rewarding to watch my son walk a winding path through a range of weapon making and play-fighting activities over time, building skills, transitioning to other games and interests, and tackling interesting problems and design challenges along the way.