No One Edits Alone: Connected Learning in Game-Based Wikis

Guest blogger biography: Amanda Ochsner is currently a PhD student at the University of Wisconsin-Madison and Interim Research Manager at the Games+Learning+Society Center. Amanda’s research interests focus on learning in online game communities. She is also working on a team project for the design of an online space for young women to learn computational literacies and computer programming.

Why I love wikis

I love video game wikis. I love them for the obvious reasons–for example, when I’m stumped in a game the wiki is very likely to have a walkthrough to help me see the detail I’ve missed or adopt a new strategy in the boss battle. I also love them because they can support multiple play styles and strategies. For example, the wikis around Nintendo’s Pokémon games–where players collect digital fictional creatures and battle with them–have an incredible level of detail about each of the 649 creatures in the series. This information includes their stats, the moves and abilities each Pokémon can learn, their history, and a plethora of other details. Depending on how a player chooses to progress through the game, different information is relevant. Pokémon games can be played independently and casually, with even novice users not typically requiring the help of experts or outside resources like guides, databases, and wikis. However, players also have the option of exploring and engaging in deeper layers of gameplay–paying greater attention to more complex strategies like maxing out specific stats or raising Pokémon to learn special moves, breeding and trading Pokemon with others, and battling locally with friends or competitively online or in tournaments. Game wikis, like Bulbapedia (pictured below), have all of the information players need to engage in these more complex play styles. 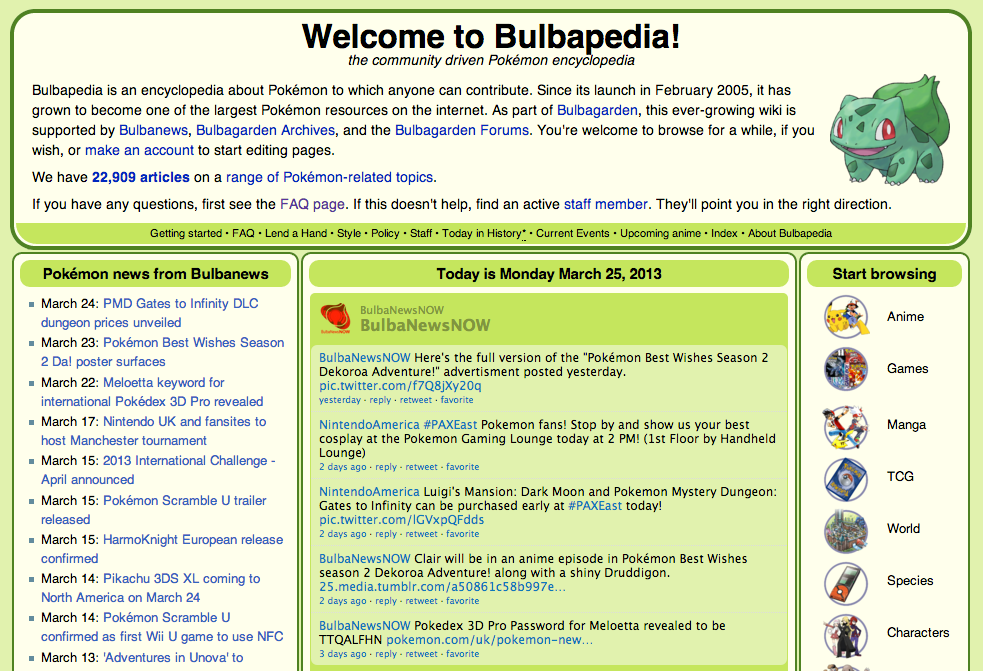 Game-based wikis tend have an extraordinary amount of information about the game they are written about. For example, Bulbapedia, shown above, has nearly 23,000 articles. This information that the editors of these sites amass, and the amount of coordination required to keep things organized and working smoothly, is astounding. The Wikia wiki for the popular first-person shooter series Call of Duty has a dedicated team of administrators, but also teams specifically focused on news posts, blog posts, images, and recent changes. Some of these more dedicated editors report spending 20 or even 40 hours each week adding content, editing posts, and corresponding with other editors. I frequently find myself wondering, who are these people that spend so much time adding to these online knowledge compendiums for the benefit of other players?

For my masters thesis research, I decided to dive into these questions to learn more about who contributes to these sites and what motivates them. For this research, I conducted case studies exploring the professional trajectories of especially active members of online spaces like wikis and fan fiction sites around game series such as The Elder Scrolls, Dragon Age, and Mass Effect. In general, I typically investigate communities around games that have recently had a new release in the series because established game communities become especially active when a new game comes out, leading to many interesting types of interactions to observe.

One of these case studies centered on Erik, an administrator on the wiki for a popular action role-playing game series. In this case study, I outlined how editing on the wiki played an important role in Erik’s educational trajectory. His experience provides great examples to illustrate the connected learning principles. Like many young American men, Erik had an interest in working in the video game industry in some capacity, but after he graduated from high school, he had difficulties finding a job in what he calls an especially cruel economy and made little progress on his professional goals. His initial interest in the wiki was interest-powered–he simply loved the game series and had an excess of spare time, so he began making occasional edits on the wiki. He began by making small edits to other people’s content, but progressed to making pages and eventually even designing and coordinating projects with other editors. Erik never anticipated being especially active and says if you would have told him early on how involved he would eventually be, he would have “called you crazy.” However, as his participation increased–aided in part by his being able to get a new computer–Erik began to develop a more production-centered attitude about his role in the space, and he started to learn about doing more than simple edits.

He also started working with other editors and they began to collaborate on common goals and develop a sense of shared purpose for the direction of the site, leading him to a more peer-supported type of participation. This is how he describes the community:

“My sense of the community is that the regular editors are very supportive, and try in many different and unique ways to improve the site, content, and how we present ourselves…The more people are here regularly, the better we are. We are all supportive of each other, and frequently cooperate to improve things.”

Collaborating with other leaders in the space and enculturating newcomers became a high priority for him, resulting in him feeling a sense of responsibility for the quality of the site and toward his fellow editors.

Finally, this enthusiasm started to spread over to other areas of Erik’s life, and he enrolled in community college where is he is earning degrees in game design and music education. The combination of being more active as an administrator on the wiki and being enrolled in school created a challenging schedule, but Erik has been able to manage it well; he says, “it’s all about balance.” Many of the skills he had developed through his work with the wiki, like managing time, collaborating with peers, and writing, are relevant to and useful in Erik’s academically oriented pursuits. While it is surely not the sole cause of his recent progress, the wiki has played an integral role in Erik’s recent professional strides. I don’t know whether Erik will ever work in the games industry, but I can say that Erik’s love for the game series led him to be an important contributor to the wiki, which in turn helped him to develop a number of valuable professional skills that I expect will serve him well in his career and future endeavours.

This research provided me with some great case studies about exciting successes in which committed participation in connected learning spaces around games led my research participants to promising professional gains. However, by design, I initially sought out people who were especially committed to these spaces, and many of them were leaders on the sites. In my current phase of research I am working to outline and understand more typical patterns of participation on games-based wiki sites. I have been pulling samples of the most recent edits made on each of the wikis–on different days and at different times to gain an understanding of typical patterns of activity. This phase of the research is by no means polished or complete, but several interesting threads of participation types that tie to connected learning principles are starting to emerge as I code for the most frequent types of edits and talk.

The primary reason people go to these sites in the first place is because they are interested in the game, but the wiki also allows them access to social supports around this interest. Once there they find others who are interested in talking about the games, whether it’s their knowledge of the period of history in which the series is set, a passion for generating theories about the game world, strategies for improving gameplay, or another area of interest. Some editors gain access to new learning experiences as well, through learning to mediate conflicts between editors and take on leadership roles, through learning to build bots that make routine edits to the site, or through other avenues of participation.

Over the next several months I will be continuing to code for different types of participation on these wiki communities, and doing surveys and interviews with editors about their research, writing, and editing practices. It is my experience that people who participate in connected learning spaces like game wikis and fan fiction sites often do not see the effort they put into these spaces as valuable work–or recognize that they’re learning–simply because it is interest-powered and peer-supported. In a culture that values work over play, there is great value in better understanding spaces where people voluntarily volunteer their time, learn valuable skills, and love doing it. Let’s learn from these spaces so we can design for connected learning experiences and leave people feeling motivated and proud of their accomplishments.