On-ramps, Leveling Up and Recognition: How the StarCraft 2 Community Deepens their Interests

The StarCraft community is one of the most productive gaming communities, spearheaded by community leaders who earn recognition by expressing their passion for the game through creating gaming content or organizing gaming events.  Many active community members become community leaders, recognized content producers, and top level players.  We found that some of the most productive and recognized community members had support for their gaming interest at an early age, which transitioned into deeper engagement as they grew older and encountered peers with similar interests online or in their local communities. By studying the participation and learning of the community’s most successful and productive members, we found that they have found their way into such respected positions by practicing and learning for many years in different social circles, including at home, at school, and in online communities.

We interviewed several key members of the StarCraft community and they often spoke of similar patterns in their upbringing. Typically between the ages of 5 and 11, they would first encounter computer games through family members or cousins. Then usually after 13 years of age, they would carry this interest into either their school life or into an online community by becoming an active participant. Within these social spheres, they would find peer support, childhood rivals, and key partners who nurtured their growing interests. In time, their expertise and sense of purpose for participation in electronic sports grew; they volunteered as key members of the global StarCraft community at Teamliquid.net and elsewhere.

Sixen is an example of a StarCraft participant whose early interest in the game transitioned into becoming a leading member in the modding community.  He was introduced to StarCraft when he was 5 years old. He became acquainted with StarCraft modding at 10, first joined a modding online community at 13, and became a leader of a StarCraft II modding community, SC2Mapster.com, when he was 19. He was given the opportunity to start up SC2Mapster.com by a commercial advertising company because of his years of exposure to modding practices and mapmaking expertise:

So right now I run basically the StarCraft II mapmaking website, SC2Mapster. And I mean, like I said, I run it. I’m lead admin. It’s kind of my baby. Curse Inc; they host it, Curse Network. They technically own it, so they host it. They pay for the – they foot the bill and everything. But otherwise it’s my baby. Otherwise, I mean I had a lot to do with the StarCraft I mapping community. That’s kind of where I just took place in StarCraft II. It just made sense for me to move on that way. I did a lot of StarCraft I mapping and, again, I had a lot of fun doing it and I learned a lot and I was just one of the main people from back in the day that did StarCraft I mapping, so again that was just how I moved on to StarCraft II.

Through early support of his interest, Sixen was able to turn his passion for mapmaking and modding into a commercial project that sustained a community of mapmakers and modders who shared his interest.

We can find similar patterns in the stories of the most productive participants, including a mapmaker known as IronManSC. As a recognized community figure and talented mapmaker, IronManSC has had his map featured in many widely-watched International StarCraft tournaments. He mentioned the influence of his father and brothers had on his interest in designing maps:

Well, my Dad and my brother—they’re graphic designers.  My – I have one brother and two sisters – well, two – one sister and one sister-in-law.  They are teachers.  And yes, I mean, when you look at that, it’s just – you kind of just have that creativity in the family.  Like, crafts that the teachers would make, and drawings and designs that my Dad and my brother would make.  So – and growing up, I always drew stuff with my brother.  We had drawing pads and we would just draw stuff all day.  You know.  We would go to restaurants and draw on napkins and everything like that.

While becoming a high level competitive player is a popular way of becoming a valued StarCraft participant, there are other alternative pathways. For example, IronManSC had chosen to make competitive maps. A participant may also try to organize online or school-based StarCraft events. These activities are equally effective in equipping youth participants with skillsets critical to becoming active and contributing members of the StarCraft community.

As these players age, they begin to venture beyond their comfortable family support. There are other social spheres beyond the home in which they find peers with common interests, including school, their neighborhood, or through an online community. In the case of Day[9], he started playing StarCraft with his brother at home. However, they soon found other computer gaming friends in their neighborhood. While few of them played StarCraft, Day[9] recalled that most of them were deeply into competitive gaming:

Weirdly I was part of a real competitive crowd that loved the whole competitive gaming thing.  It was me and Brandon and my brother, and Parker and Beam.  We were just really serious and hardcore about it.  [My brother] and Brandon played Marvel Vs.  Capcom 2 really competitively.  Dane and Jonas played shooting games competitively.  [My brother] and I were the StarCraft guys.  We would all sit down and would all have our own domain of expertise that bled on over.  For instance, I don’t play Marvel Vs.  Capcom 2 but I love watching it.  I think it is so fun to watch.  I know how to follow the Counter-Strike 1.6 team even though I dabbled a little bit in it with Dane and Jonas but never got too seriously sucked into it.  That helped a lot.  On weekends going to LAN parties.  It was always a dream if you could get two day LAN party.  Friday and Saturday night.

In an interest-driven ecosystem, experts in the StarCraft community play a crucial role in creating self-help resources that provide information to novices to assist them in gaining expertise and learning to participate in the community in a meaningful way.  Community members such as Sixen, IronManSC, and Day[9] not only thrived from the support of their local communities, but also from the online community and the content it provided.  As members of the community become more fluent in the game, they are increasingly capable of contributing their own expertise through their own content.

An example of such contents are online videos which professional gamers share for other players to observe and learn from. The screenshot below shows the Twitch homepage of a professional player known as SeleCT, who has been sharing online videos so that viewers can watch how he plays. The figure shows that SeleCT’s streaming channel has been viewed over three million times in the past. 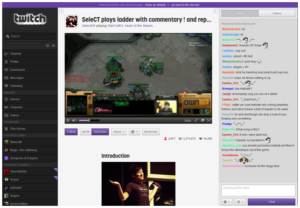 High-level players also share their tips and writing about strategy in community forums for discussion. Knowledgeable players and commentators such as Day[9] provide video tutorials not only on new strategies by popular players, but also on insights into how to think and improve with the game. These resources document their pathway to becoming the world’s best players so that others may follow.

The StarCraft community remains one of the most active and productive gaming communities that exists today, hosting both online and offline events that attract the attention of thousands of community members. Many community members spoke about support from these communities as contributing factors to developing their interest at a young age and continuing to develop their interest over time. Such patterns suggest that learning is a continuous process. For participants, StarCraft may well be the beginning of a lifelong journey of learning in competitive and peer-supported environments.