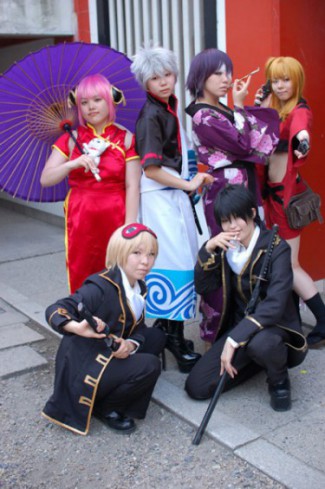 I have had a longstanding personal and research interest in otaku–activated fans of Japanese animation, games, and comics. Science fiction writer William Gibson has called otaku “passionate obsessives” because of their boundless fascination with the minutia surrounding obscure and niche popular cultural forms. In many ways, otaku culture is my personal template for activated geek learning that is centered around passionate interests. What is it about otaku learning that exemplifies the potential of geek forms of connected learning?

Otaku culture, even in the pre-digital age, was based on an end-to-end and peer-to-peer organizational structure. For example, the Comic Market, which has been operating in Japan for decades, is the first widespread form of an otaku network event. While there had been prior conventions that centered on manga (Japanese comics), the Comic Market was initially a splinter group that created an event in 1975 that was specifically for self published comics to be bought and sold in a peer-to-peer format. This became the basis for a burgeoning market in doujinshi (fan comics) that blossomed in the eighties and nineties. Today, the Comic Market attracts over half a million fans twice a year to the largest convention site in Tokyo, and there are scores of similar market events held all over the country, often centered on specific genres or series.  All of these events subscribe to a similar ethos of open participation and peer-to-peer networks that Hiroaki Tamagawa describes as “the commitment to minimize discrimination, hierarchy and authority and to ensure diversity.”

When the Internet came along, the platforms for otaku culture expanded, diversified, and internationalized; otaku had found their medium. Ranging from online forums like 2-chan and 4-chan, fan art and music, anime music videos that remix Japanese animation and popular music, or fansubbed anime (fansubs), digital forms of otaku culture have proliferated and spread through digital networks.

One core dimension of otaku culture is the centrality of DIY remix culture. Unlike more mainstream forms of media engagement that center on consumption, reading, and viewership, otaku culture has always centered on production and self-expression. For example, one of the earliest forms of otaku culture are train fans who traffic in the minutia of trains, train schedules, and related technology. Train otaku are not content to simply accumulate knowledge about trains, view, or ride trains, but they build elaborate models, take and collect photos, and build extensive databases and archives. Similarly, fans of manga create their own works based on the characters in popular series, and anime fans remix videos and create handmade costumes and figures based on their favorite characters.

Like other DIY cultures, otaku culture lowers barriers to production and celebrates everyday and amateur creation. Just as in the case of online networks, digital media has handed otaku culture new and more accessible tools for creative production. While costume, figure, and comic making have been long standing forms of otaku production, digital production tools have made web comics, electronic games, digital remix video, and digital music thriving parts of the growing pantheon of otaku-created media.

Conducting research with fansubbers who translate, subtitle and distribute anime for overseas fans, I was constantly struck by the heroic amount of effort they put into perfecting their craft, putting long hours into the backbreaking work of turning around and distributing a series week after week. The most committed fansubbers would have a translated episode out within a day of broadcast in Japan, much more quickly, and often with higher quality than a professionally localized episode. They accomplish these feats with a purely volunteer labor force organized in tight-knit teams. We see similar levels of volunteer commitment with organizers of fan conventions and fan artists who dedicate tremendous amounts of time to their hobbies and fan communities. When I asked fansubbers what drives their commitment, many will point to social belonging and recognition, or to the thrill of learning something new. Without exception, however, all describe a sense of shared purpose or mission they feel in giving expression and spreading their love of anime, a set of genres that they believe are more sophisticated and authentic than mainstream fare in their home countries.

Fansubbers taught me how a sense of mission and purpose, of contributing to an important societal or cultural goal, can drive forms of participatory culture that involve hard and routine labor. We often think of participatory culture or amateur production as fun and playful, but when guided by a broader sense of mission it can involve hard work and challenging forms of learning as well. As we have moved into research on connected learning and participatory politics, these dynamics have risen to the forefront of our work.

While otaku culture in many ways epitomizes interest-driven and peer-to-peer learning, the links to civic engagement, economic outcomes, and academic learning can often be tenuous. The connected learning model helps us appreciate the uniquely activated and participatory forms of learning that otaku culture supports, as well as confronting the limits of these forms of learning in leading to outcomes and opportunity outside of specific niche subcultures. I see boundless potential in connecting fan engagement to civic, academic, and economic outcomes in groups like the Harry Potter Alliance, or in fan fiction writers who aspire to become professional writers. I also think as educators we can do much more work to help young people realize these connections and outcomes.