Teach Me StarCraft: Seeking experts in a skill-oriented gaming community 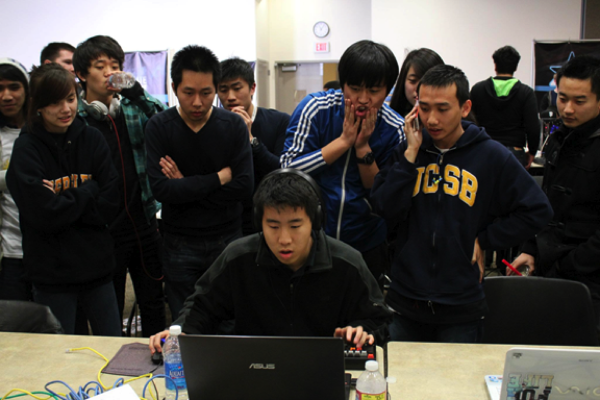 The StarCraft 2 community and the surrounding eSports phenomenon embraces learning approaches that can be directly applied to improve understanding of high-level strategy.  Real-time strategy games, such as StarCraft 2, are the opposite of traditional turn-based strategy games, such as chess, as each unit in StarCraft 2 functions in “real time” and both players’ units can be moved simultaneously at any point in the game.  Knowledge of current strategy is a key resource used to best an opponent on a virtual battlefield.  Strategies are recorded and stored in a vast amount of online media – forums, wikis, YouTube commentaries, replay files, and professional gaming videos. Top players and commentators have stated that they carry their own notebooks with write-ups of current strategies and metagame (used to refer to current trending strategies, and their counters).

Players are capable of engaging a variety of learning strategies and relationships.  At a high level, players can absorb the massive amounts of strategy information from online forums, wikis, videos, etc.  Digging deeper, players can then seek practice partners or join clans.  Finally, players can meet one-on-one with an expert player to receive coaching.

Given the plethora of information that players must digest and be ready to use, those seeking to improve their game will often seek out experts – professional gamers and high ranking players.  Professional gamers and high-ranking players often offer coaching services, sometimes charging a fee for one-on-one mentoring, depending on the popularity or schedule of the coach.  In other cases, coaches will train players for free, or players will seek equally skilled opponents to serve as practice partners.  The demand for knowledge and expertise in StarCraft has been enough to spawn a number of commercial coaching services such as GosuCoaching.

The StarCraft 2 coaching program at TeachMeStuff.net, a mentor matchmaking platform, was designed to make games-coaching more accessible to more casual and younger players who still found the drive the improve.  It also allowed for passionate StarCraft 2 players of higher skill to share their knowledge with others, without having to be among the highest ranked players in the game in order to be recognized as a potential mentor. Casual players are provided an alternative in seeking a dedicated coach outside of traditional commercial channels.  Currently, there are forum threads dedicated to public listings of free coaches and eager students, but these listings are for the most part unregulated, uncurated, and contain a potentially overwhelming amount of information.

StarCraft 2 was chosen to be part of the mentor matchmaking platform alongside activities such as web development and DIY as the player improvement could be easily tracked through the game’s built-in ranking system.  This also encouraged coaches and students to set a clearer goal for practice (example: reach Gold league by the end of the trial).

In the StarCraft 2 coaching trials at TeachMeStuff.net [link], the first trial opted to follow a one-on-one coaching model where we recruited a pool of applicants who were designated coaches, and matched them with applicants who were designated students.  While this model worked for some, we found that only the highly motivated coaches and students who were dedicated enough to set aside time to practice with one another made noticeable improvements in their game ranking.  Other students and coaches who were interested, but not highly motivated, would neglect trying to overcome scheduling conflicts, and eventually lose interest in coaching or learning through coaching.  As most of the coaching was done online, we found scheduling between multiple individual’s needs across numerous time-zones to be a big obstacle in nurturing a friendly and motivating online coaching space.

The achievement and badge system only reinforced the already highly motivated players, but did little to spark greater interest in those mildly engaged with the program.  Feedback from the second trial showed that achievements and badges were secondary factors to those seeking to improve, and that students and coaches primarily valued the coaching and learning process itself.  These values embody a shared purpose of sportsmanship in the eSports culture surrounding StarCraft 2, and is pervasive in many aspects of the community.

The group coaching sessions were more successful – with groups of 4 to 8 players collectively and regularly meeting online to practice.  In these sessions, there were designated coaches and designated student roles, and coaches would watch a student game together to give collective advice.  The gathering and interaction between the coaches and students proved to be one of the most effective learning environments for the players, and after a few group sessions, more students ranked up.

In one of these early group coaching sessions, a struggling Zerg player was coached by a few higher level Zerg experts over voice chat.  One coach focused on curating the player’s build order (step by step strategy instructions), while the other curated specific mechanics on economy management.  This gave the student a well rounded scope of what to focus on to improve his play, and he soon ranked up after the coaching session.

In the third phase of the trial (currently ongoing), we have more or less dissolved the coach and student model and made group practice sessions a regular weekly occurrence, open to all players of any skill level.  After recruiting a few interested participants, the first group practice sessions aimed to let players simply practice with one another through methods that were more natural to them, rather than enforce a coach-student structure.  Students who would still actively seek a one on one coach could still be matched with one on the side.

With no designated roles, the players were still capable of getting into the game and immediately providing feedback for one another in ‘crit-session’ style.   Through voice chat, players were capable of getting feedback, while playing, from multiple spectators who would often collectively guide the player with their strategy.  Depending on the player’s faction, one particular spectator may take up the role as the ‘expert’ in one specific game and offer insight into the matchup.  In another game, the same ‘expert’ may step down and let someone else with more experience in the other matchup provide more feedback.  In other situations, there was no clear individual expert aside from the collective discussion of the spectators to the players.

An example of this peer supported learning style emerged in a recent group practice session.  One player played a game with another practice partner in which he showed off a new strategy he had seen demonstrated online.  The strategy was so effective that several players asked him to send them the video and coach them on the spot.  However, some players were also curious on how to beat such a seemingly “unstoppable” strategy, so a different camp of players emerged that tried to learn with one another to overthrow the practice session’s dominant strategy.

This dynamic role assignment is an interesting finding within the StarCraft practice sessions as it reflects not only peer learning principles, but also the attitudes toward learning within the player community.  While StarCraft 2 ranks players on a universal system, these rankings do not always automatically designate the roles of coach or student during practice sessions, often blurring the lines between the two. While an individual may play the ‘coach’ role for a period of time, they are eager to switch to a ‘student’ role in light of another expert who can fill in the gaps in their own knowledge and play – highlighting an important aspect of becoming a lifelong learner.

Through the StarCraft 2 coaching trials, our team found that the values of sportsmanship in eSports proved to give players a strong sense of shared purpose to help each other improve, resulting in peer supported coaching and learning activities as evidenced by our group practice sessions.  With all the tweaks made to the coaching program, we observed that the most effective results for players came when the program took advantage of existing and naturally occurring learning activities that were already happening in the StarCraft community.