The Tension between Convention and Innovation: What is the Norm in a Blended Space?

This is the second in a series of posts that explores the tensions between innovation and convention, and what it means for the design of Connected Learning Environments.  This post focuses on blended learning spaces and their affordances for innovation and conflict. 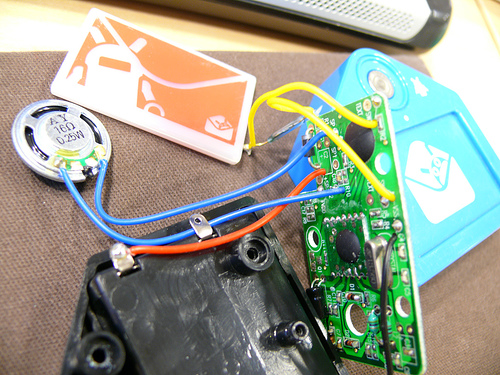 In my last post, I highlighted some of the reasons why innovation can be difficult.  By definition, innovation means going against the norm.  Thus, even the simplest deviation from the norm, such as putting children in foldable shopping carts, can result in public scrutiny and even condemnation.  Innovation is risky, but it is also desirable.  So how do we craft learning environments that prepare students to assess and take risks to form innovations, especially in the face of possible public criticism?

An approach that some schools and organizations are taking, particularly around encouraging technology innovation among youth, is constructing blended learning spaces.  Blended learning spaces combine distinct spheres of practice—such as cooking and computer science, or fashion and engineering—and integrate these spheres into a learning environment that strongly encourages, through shared practices or intersecting content, bi-directional application of the skills, practices, and knowledge from each of the contributing spheres.

In terms of innovation, the blended approach creates conditions where individuals are actively reframing their perceptions around where and how certain practices, skills, knowledge, and ways of being can be applied.  This practice in reframing and exploring alternatives are key dispositions to foster because they have been shown to support individuals’ abilities to break out of routine interpretations which can get in the way of innovation.  A study by Flavell, Cooper, Loisell (1958) found that participants who were given explicit practice in reframing uses for mechanical objects were quicker to use a target mechanical object in an atypical manner when faced with a task of solving a novel problem than those who did not have this experience.

Although these spaces are great environments for supporting innovation, the blended nature of these spaces can also lead to conflict.  When there are competing expectations and norms, determining what is appropriate and how members of a group should behave may not be readily available.  This tension was brought to the forefront when I visited a blended space called DC.

DC is a program created to teach middle school students about electronics through art design.  DC is held in a classroom at a charter school in an urban city on the east coast.  And despite being in a space filled with rows of desks and educational posters voicing motivational mantras such as “Be a Team Player!” and “Here are the Steps to Problem Solving Success,” the program still has a design studio/hacker workshop type of feel—student projects are spread out haphazardly across the room, the cart of tools is stationed in the back, and the ten students (9 boys and 1 girl who were either White or Asian) rove throughout the room with smart phones, laptops, and electrical wires in hand.

The task for the day was to create a new enclosure (the shell that encases the electrical components of a gadget) for an input device, and use the new input device to play an online game.  In essence, the assignment asks students to create their own video game controller by hacking and remixing an analog mouse.

Instruction for this project was organic—no handouts are passed out or PowerPoints presented.  Instead, the instructors gathered students in a circle, showed them how to dissect the mouse, and explained the purpose for each connection.  Afterward, students were released to whatever workspace they claimed when they first entered the room.

I sat in the back, observing a couple of boys seated in the center of the room.  Boy 1, who I will call John, is doing something on a laptop.  Boy 2, Mike, is diligently working on his controller.  And Boy 3, Terry, is looking over the shoulder of John.  Here is a snippet of their conversation:

Terry to John: “What are you doing?”

John: “Tyrone is still logged into the computer.  So I am changing his language settings.  I was going to change his password, but I decided just to change the language.”

Mike: “I hate Tyrone.” [murmurs of agreement come from different parts of the room] “Nobody likes him.” Another kid relates a story of Tyrone complaining about being disciplined in class.

Finally Mike says: “Why are you talking about people in generic terms?”

Mike:  “Well, you shouldn’t talk about people in generic terms.”

With these words the room unfreezes.  The air of tension leaves, and students restart their previous activities.  I continue to observe, and I leave about 30 minutes later, perplexed and fantasizing about a nap.

Reflections on the DC experience

My experience at DC generated several questions.  Should I have stepped in and asked John to undo the malicious hack on Tyrone’s computer?  Did the group think John’s actions were just because of their shared hatred of Tyrone?  How much of Mike’s admonishment of Terry was a means to protect the image of the group in front of an outsider who happened to be black?  And why were the instructors inactive in this whole exchange?

These questions caused me to think about the dynamics of a blended space, and the tensions that are bound to arise because of the different norms, values, and expectations that define the distinct spheres of practice.  DC is a blended space that attempts to blur the line between a peer-centered, interest-driven social group (art design) and a school-sponsored, academic activity (electronics).  To blend these spheres, the space is designed to have both peer-centered, interest-driven features (activities are framed as suggestions, students openly use personal phones, socializing is rampant) and school-based, academic features (program is housed in a school, the content is focused on academically valued information, and adults design and oversee the activity).

However, despite DC having features from both spheres of practice, each sphere still has its own values, norms, and expectations.  And these distinctive norms, values, and expectations may come into conflict.  For example, is John even on task?  Because this program is trying to simulate both a peer-based, interest-driven voluntary environment while simultaneously being an academic program, defining what is on task is slightly difficult.  From the perspective of a peer-based group, I think he would be considered on task.  Yet from an academic perspective he would not be.  And for the question of whether or not an adult should have intervened, wouldn’t adult intervention (and the presumed monitoring of student behavior) eliminate the peer-centered aspect of the space?  How to negotiate these conflicts while keeping the blended ecologies is something that I think still needs to be explored.

Creating blended spaces is a productive approach towards encouraging innovation.  Blended spaces remove conventional partitions that separate the many spheres of practice (e.g. home, school, work, peer-group, sports team, social media) that we all engage in.  These spaces encourage individuals to connect understandings and ways of doing and being across the different spheres of their lives.  However, blended spaces present a risk and an opportunity.  Because these conflicts of norms will occur, the risk of criticism from outside and within the blended space is high (I know I left DC with a list of criticisms).  However, the events that generate these criticisms are great for providing students with authentic opportunities to explicitly negotiate risk and criticism.  I actually think Mike’s admonishment of Terry, no matter what motivated it, is an example of negotiating possible criticism from an outsider.  I also see it as Mike volunteering a potential shared understanding for the group about behaviors that defined the group.  Finally, I think this proposal from a student, and not an adult, says something about the effectiveness of the DC program in fostering student innovators.