Understanding Fatherhood in the Digital Age

In this blog, Gillian Ranson looks into the rise of the father blogger. Recognising their growing impact, she reflects on the role of father bloggers with advertising as they become a potential source of revenue, as well as their position as ‘parent experts’ who are professionalised as fathers. Gillian is Professor Emerita of Sociology at the University of Calgary, Canada. She is currently working on a book project examining parenting culture in Canada today. 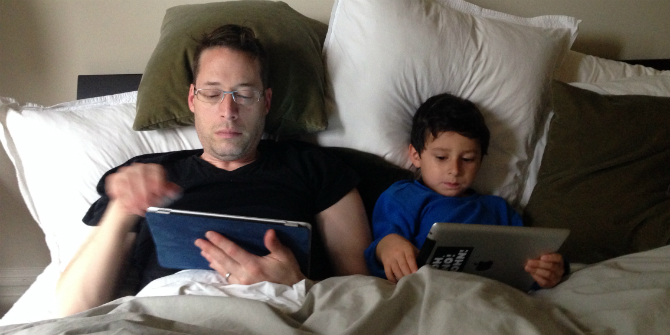 Blogs are a burgeoning field in the world of parenting information and opinion. Until recently, this field has been populated almost exclusively by mothers, with a growing literature directed to the ‘mama-sphere’ and the ‘mommy bloggers’ who inhabit it. Now fathers are also claiming space. Their growing collective presence and output are a potentially rich source of data for researchers interested in the potential of blogs to shape dominant understandings of fathering.

My own engagement with fathers’ blogs emerged from a study of their experience as hands-on carers for very young children in Canada. I soon learned that fathers writing about the daily care of small children – as many father bloggers do – were voluntarily providing exactly what I was asking the fathers in my interviews.

In my book, I describe the complicated and challenging task of selecting a sample of blogs from a pool whose size (like the internet itself) defies calculation. I located 20 blogs that fit my research purposes, written by fathers in Canada, the US, UK and Australia. I followed their posts for a single year (2014), although in many cases their stories led me to writing they had done at earlier times, and to other publications beyond their own blogs.

Many of these fathers were explicit in their intention to reframe conventional understandings of fathers and fathering, and to position themselves as competent caregivers who are deeply engaged with their families. For example, UK blogger John Adams noted that he did ‘pretty much everything society expects a mum to do’ to care for his five-year-old and a 22-month old. He wrote about tasks like ferrying children to school and nursery, cooking meals, shampooing hair, organising play dates and updating the family calendar. In one post he asked, ‘Why wouldn’t a man be capable of doing this stuff?… I genuinely wish I lived in a society where I wasn’t a curiosity.’

His message was that fathers ought to be engaged, hands-on caregivers, who don’t take power from mothers and gain privilege for themselves, but instead, with the purpose of, and interests in, gender equality. The fathers saw the need to share the immense body of work known as parenting in ways that supported the interests of both mothers and fathers.

For the bloggers themselves, perhaps the greatest benefit of blogging was the opportunity to build community, notably with other father bloggers who were a key group of readers. Blogging allowed them to build relationships, both on- and offline. A (closed) Facebook group that was started in 2013 exclusively for ‘dad bloggers’ had an estimated membership of more than 1,000 from countries around the world by March 2015. By April 2017 it was more than 1,200. Their online connections translated, in many cases, to face-to-face meetings as well. Conferences like the Dad 2.0 Summit in the US, started in 2012, have become a favourite annual meeting ground for the ‘daddy bloggers’ and an important focus of media attention about fathers.

Another noteworthy dimension of the father blogging community is the growing social significance of its online reach. Bloggers use their networks, now greatly expanded by social media such as Facebook, Twitter and others, to mobilise support for causes of interest to them. In 2012 a group of US father bloggers ran a successful campaign to get the manufacturer of a well-known brand of nappies to change advertising that clearly framed fathers as incompetent. Father bloggers in Australia, the UK and US have recently been drawing attention to the absence of baby-changing tables in men’s washrooms. Policy issues are also a focus – four of the six UK bloggers in my sample produced thoughtful posts about the changes in fathers’ potential share of parental leave that came into effect in April 2015.

Professionalising – of blogs, and fathers

At the time I was reading the fathers’ blogs, their online reach was having two interesting consequences:

I concluded my research on father bloggers with two lingering questions. Will the commercialisation of fathers’ blogs come to diminish their influence as forces for progressive social change? And will the growing use of social media – such as Facebook and Twitter as alternative, ‘micro-blogging’ formats – come to position such blogs as a passing phenomenon in a rapidly changing technological environment? If this turns out to be the case, the work of father bloggers in changing the social environment of their time ought not to be forgotten.

This post gives the views of the authors and does not represent the position of the LSE Parenting for a Digital Future blog, nor of the London School of Economics and Political Science.