A Fandom of One’s Own: Fangirling and Learning in a Boyband Fandom 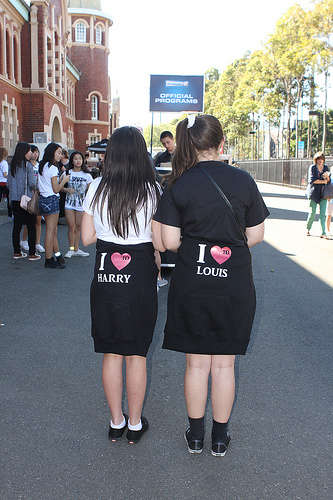 The Anatomy of a Fangirl

Fans of the young boyband One Direction (1D) represent a diverse group, with members participating in the fandom and conceptualizing what it means to participate in different ways. Within multiple topics started on the Wattpad forums devoted to introductions, story topic generation, and general discussion, 1D fan fiction writers and readers try to pin down what it means to be a fan. In interviews focused on their engagement in the fandom, participants — middle- and high school-aged young women — narrated their identification as teenagers, millennials, students, women, and, commonly, fangirls. Although interviewees identified and thought about those identity categories to varying degrees, self-descriptions always included a nod to “fangirling”. This blog post details practices and identities described with the label of “fangirl” and considers links to the Connected Learning principles.

The interviews informing this post were deliberately open-ended, sharing a soft focus on learning and community-making practices of young people. I asked participants following the British boyband on Wattpad, Tumblr, and Twitter about the activities important to them in those spaces. Central to contextualizing their activity was figuring out what it meant for the participants to be a fan. Interestingly, although the word “fan” was not used in the interview protocol, almost all of the interviewees defined their fan identity in alignment or opposition to the category “fangirl”. Some embraced the term, using it as an important aspect of their self-identity. Others described themselves as specifically not fangirls, while some members used ‘fangirling’ as an inoffensive verb; an umbrella term for the kinds of activities and acts that index cultural membership of the One Direction fandom. Activities filed under “fangirling” included writing/reading about the band, cataloging their tweets and retweets, scrolling through pictures, feeling your heart stop when a song came on on the radio, or subbing their song into your home language.

Fangirling as Forming Affinity and Community

As 18-year-old Meera1, from India, explains: “I liked [the band] but didn’t fangirl until I saw the video for ‘What Makes You Beautiful.’” Prior to the video, she enjoyed listening to the teeny bopper pop songs “just as any other teenage girl.” However, something about that music video captured Meera’s heart as she began seeking specific biographical information about the singers, joining affinity groups on social networking sites, and eventually reading and writing boyband-themed fanfiction. In a word, she was fangirling.

A great boon for Meera in her participation in the fandom and on Wattpad in particular was being able to connect with like-minded fans. In her words, there were no other Directioners at her high school, so being able to meet, talk, and “fangirl out” with other Directioners online was a transformative experience. In fact, this is how she struck up a friendship with Nicole. Nicole and Meera bonded over the fact that they had very similar backgrounds and were the only Directioners in their schools, often too embarrassed of the fangirl stigma to discuss their object of affection with others. Independently, in their interviews, both girls explain that before dabbling in fangirling, English for them was only the language of compulsory schooling in their home country. Since then, English as a language has also gained association with fun and out-of-school literacies for the girls.

Meera’s new friend, Nicole, a 15-year-old also from India, has a two-and-a-half-hour bus commute to her school in Mumbai, both ways. Consequently, she maintains a high amount of daily screentime. She explains that she discovered her love of 1D by accident, while writing a school report on British food, culture, and music in English class. She hid her affection for the band from her schoolmates and friends for fears of being made fun of, or worse, bullied. 1D fans did not enjoy a high status or strong cultural cachet at Nicole’s private Mumbai high school; in fact, the “excessive woman” stereotype in the form of a hormone-driven, immature, crazed tween girl was firmly coupled to the label of “Directioner”. This is why Nicole first browsed Wattpad for stories about 1D, but stayed for the sense of community.

The discourses drawn upon to describe the 1D fandom echo Rhiannon Bury’s (2005) book2 on the all-female virtual community based on the sci-fi show the X-files that called themselves the David Duchovny Estrogen Brigade. In contradistinction to male-focused discourses of equivalent online fandoms of the time, members of the Estrogen Brigade carved out a space for themselves that explicitly addressed, deliberated, joked about, and sometimes celebrated femininity. Similarly, the gendered space of the 1D fandom is often tackled head-on in self-descriptions and forum discussions. Abigail, a 14-year-old girl from Canada, who specializes in sci-fi-inspired 1D fanfiction (the main boyband heartthrob lives in an alternate universe in these stories), would describe herself “more as a FAN than a fanGIRL.” In part, this is because her interests on Wattpad are quite literary and serious. She enjoys some 1D songs and fanfics but would never “jump up and down” if their song came on randomly (which is characteristic of fangirling). Abigail is also wary of being called names or perceived as immature by her peers or family members so she rarely admits being a fan to them. She talks about fangirling in interchangeably lighthearted and critical tones, but is glad that there exists a safe haven for that sort of thing on the internet, “even if it’s just a phase.”

The Shared Purpose of the Fandom

It is perhaps instructive that Abigail — through her participation in an all-female fan space — was able to develop a writer’s voice and a confidence that allowed her to apply to a selective, private technical school in her city that has historically attracted mostly boys. In a similar turn of events, Nicole – with support and encouragement of fellow fangirls – is no longer afraid of being outed as such by her school colleagues. Although Nicole describes finding a fangirl community in mixed terms, ranging from reading stories from other fans to finding a group of girls “as crazy as” her, involvement on Wattpad helped her solidify her sense of self and self-efficacy in online spaces and in the world at large.

Stories of Nicole, Abigail, and Meera nicely illustrate the importance of peer-support and shared purpose, as laid out in the Connected Learning Principles. Spaces in which learners are connected by a common interest — such as fangirl communities — afford opportunities to those learners to mutually engage in interests and ideas common to all participants. Connected learning researchers have shown that such spaces foster inquiry among learners, and that learners participating in these spaces benefit from coming together with different interests and activities. Directioners sharing stories, pictures, and .gifs on Wattpad practice and instantiate the importance of peer-supported learning and shared purpose. Animated with a common passion, fans produce, collaborate, critique, egg each other on, and share resources connected to 1D fanfic.

At the same time, narratives of involvement in the fangirl community put forward by the interviewees complicate the reach of these principles for educator-designed learning environments. The fans I talked to enjoy the sense of community they get from participation in the fandom, and the literate experiences they have on Wattpad often inform and enhance their school and professional lives. Yet because of the teen girl-specific nature of their interest and the stigma associated with being a fangirl, this interest is kept in a sphere separate from fans’ family and school lives. Moreover, fans expressed to me that because so many activities in their online and offline lives were adult-directed, they felt a breath of fresh air in having a space that is dedicated to teens only. Specifically, participants described to me that often when they expressed a passion for an activity or a popular culture object, their parents would express either distaste if it was not in a academic realm, or over-enthusiasm if it was something school-relevant. For instance, when Abigail watched a TED talk on creative coding, her mom instantly enrolled her in a Coding for Ladies camp in a nearby city. Abigail intimated that with reactions like that she is glad to have Wattpad, a kind of place she feels like she is not supposed to share with her parents, a website on which she feels autonomy, a fandom of her own.

1 All personal names used are pseudonyms.