Changes are Coming to Hogwarts… 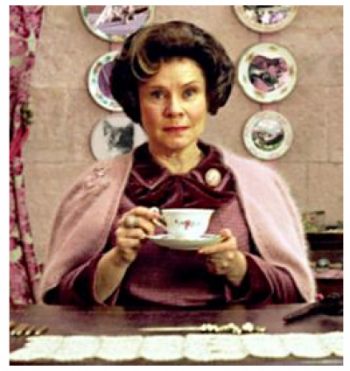 In the middle of our “fifth year” at the Hogwarts community of Ravelry, Dolores Umbridge invaded the group. In the book Harry Potter and the Order of the Phoenix, Umbridge was an evil Ministry official who supervised and asserted Ministry control over Hogwarts School of Witchcraft and Wizardry. At Hogwarts of Ravelry, she was no different. For nearly a week, she wreaked havoc on the group’s activities, including shutting down Quidditch, eliminating the monthly competition, and closing the owlry. Her chaos was carried out in an elaborate joint effort by the group’s moderators. They role-played her intervention on the Quidditch field and had her giggle while writing letters about “pruning that which must be pruned.”  For group members, this chaos was seemingly out of nowhere, and the only explanation for the havoc was a thread entitled “Changes are coming to Hogwarts…” This thread, however, offered no explanation or details, only an image of Umbridge sitting behind a desk with an ominous smirk.

Behind this elaborate role-playing and collaboration, the moderators of the Ravelry group were able to structurally reorganize Hogwarts, including change a core rule to the group and the way points are earned. The purpose of the restructuring was to get Hogwarts at Ravelry back to its core values and purpose, level the playing field for all members, and offer a warm and inviting wreaked havoc on the group’s activities, including shutting down Quidditch, eliminating the monthly competition, and closing the owlry. Her chaos was carried out in an elaborate joint effort by the group’s moderators. They role-played her intervention on the Quidditch field and had her giggle while writing letters about “pruning that which must be pruned.”  For group members, this chaos was seemingly out of nowhere, and the only explanation for the changes was a thread entitled “Changes are coming to Hogwarts…” This thread, however, offered no explanation or group to newcomers that encourages their participation and advancement.

By using the evil Ministry official Umbridge to “carry out” these changes, the moderators were able to keep up the fictional universe of Hogwarts that the members had carefully created through role-playing and crafted items. The group seeks to organize itself in ways that parallel with the book series’ universe, including functioning according to a “school year” timeline. So, to a degree, Umbridge’s invasion and restructuring was almost expected since the group was in the “fifth year” of Hogwarts – the same year that Umbridge invaded Hogwarts in the books. And the level of coordination and joint effort that so many moderators put into role-playing out her invasion gave the impression that these elaborate plans had been long planned out. But, in reality, the discussions – and plans – had started less than a week prior to her invasion.

A week earlier, unbeknownst to the main group, a backchannel discussion started between moderators and longterm members of Hogwarts at Ravelry about dwindling participation. It started with a complaint about a single incident of a member not submitting a project for points, but slowly and steadily moderators and members began chiming in that this was not an isolated incident. Participation had changed at Hogwarts. Members were leaving, potential members were choosing not to join, and the current members seemed lackluster in their involvement in the game. As the moderators reflected on the reasons for this change in the group, they concluded that the design no longer served its core purpose.  The group is supposed to offer a fun, imaginative space for fans of Harry Potter to use narrative, role-playing, and crafting to create their own fictional Hogwarts. It is supposed to be fun of members for all levels of experience and amounts of time to devote to crafting and “play” in the group.  The design of the group, however, no longer encouraged all members to participate in the shared purpose.

The group is set up to offer a fictional alternate universe where members become students at Hogwarts. Students are sorted into Houses, attend classes, and also have competitions and other activities related to Harry Potter. Most of the activities revolve around crafted items, which can function as assignments, Quidditch snitches, and school supplies. These crafted items are “graded” with points, allowing each crafter to earn points for her House. Finally, true to the Harry Potter universe, the points are used as the four Houses compete for the end-of-the year House Cup.

But after existing for nearly three years, the Hogwart at Ravelry group’s number of activities had grown quite large. At the time of the discussions, each crafted item could potentially be submitted to 22-24 different places within the “castle.” And because the rules of the group allowed each crafted item to be submitted multiple times, this potentially meant writing a narrative and submitting each item 22-24 different times.

The ramifications of this cumulative growth were felt by the moderators and long time members. The amount of work and burden on members to help their House succeed had transformed the “play” of the group into work for some.  Some members were leaving Hogwarts because they felt that they did not have enough time to fully engage in all of the activities.  Potential new members felt the group required too much work; the barrier to entry was too high.

Even the prolific members admitted that they spent more time submitting crafted items to various assignments, activities, and competitions than they did actually making the items. Instead of taking the time to creatively and lovingly craft a narrative that would tie a project to a prompt, members would allow projects to stack up and then spend an evening submitting them everywhere they could for points, with the most tenuous of ties linking the item to each activity’s prompt. The crafting of the fictional universe – through narrative and craft – had given way to the desire for “points points points!” This left members feeling disconnected from the game and from one another. Who had time to read the narratives of others when “play” time was spent submitting project after project?  Who can stay interested and engaged in other members’ activities when the same crafted item is submitted to a dozen different places, but there is little narrative to differentiate the submissions? 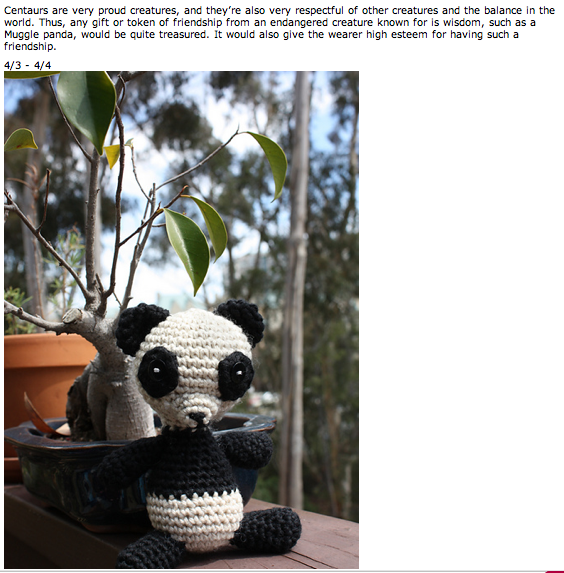 An example of the tenuous ties between item and prompt. This panda was turned in as an item that a centaur would want to wear or display in their village.

The “game” had become secondary to the work. The lovingly crafted fictional universe was taking a backburner to the “fast and furious” submission of crafted items everywhere in the castle to maximize points. Members felt a “slump” when it came to posting, and they also felt discouraged from taking on more challenging projects or new crafts. Such activities would just take too much time.

Additionally, the gap in points was growing larger between the prolific crafters and those who were slower, had less time, or worked on larger projects.  The members who were unable to craft as often or quickly felt guilty that they were letting their House down.  And when the House points were posted at the end of each “school” rotation, the casual members were reminded that the prolific crafters were that much further ahead than them.

The design of the group had become a barrier to and even worked against the core values and purpose of the group. Although the moderators did not use such formal terms, we can see that their discussion revolved around connected learning principles to understand these problems. Through discussing the problems of the group, the moderators discussed barriers to entry, the level of engagement of members, the ability of all members to participate, the group’s support of members advancing and taking on challenges, and the degree to which members felt a shared purpose that was in line with the group’s core purpose.

After laying out the problems, the moderators and long-term members all agreed that changes were needed. The group needed to be simplified and re-focused on what mattered to the group:  offering a fun and inviting group where members of all experience levels could participate in both crafting and role-playing to create a fictional universe in line with the book series they loved.  The moderators began tossing out solutions for design changes that would achieve this goal: eliminating some activities, only offering other activities during special times, and combining some areas of the “castle” to one area.  Most central and important to the re-organization of Hogwarts would be a changing of the central rule, however: each crafted item could only be submitted once.

There was no argument that the changes needed to be implemented immediately, and Umbridge offered the perfect in-character explanation for the restructuring of Hogwarts. The backchannel became a place to collaborate their role-playing efforts to explain the changes. After a week of chaos where the moderators upended and changed the structure of the group, the “Changes” were  finally formally posted as a bulleted list from Umbridge in the “Changes are Coming to Hogwarts…” thread. The headmistress (lead moderator) of the group alternated between her role as headmistress and the character of Umbridge to explain the changes and reasons to the students.

Despite all the worries of students’ reactions to such upheaval mid-year, nearly all of the students at Hogwarts were relieved at the changes. The members were in general agreement that the changes had been needed. Following the restructuring, activities became a presentation of options for each crafted item, rather than a mandatory assembly line of submissions. The high achievers from the group were still separated from the more casual members through the point system, but the difference was no longer so huge. Casual members now felt like their participation – no matter how great or small – did make a difference.The changes encouraged members to take the time to try out new challenges and advance their craft, as their House’s success was no longer dependent on a fast-and-furious crafting and submission process. There were less activities but more of a chance to engage with the group on a deeper level.

The changes at Hogwarts at Ravelry show how the moderators of interest-driven communities are more than supervisors of members and content: often they are the architects who try to ensure that the design of the group meets and helps carry out the shared purpose of the community. And we can see through the backchannel discussion that this creating and modifying of the design is collaborative and ongoing. We can also see through the discussion and changes that the connected learning principles were the driving force behind identifying the problems as well as implementing the changes. The moderators strove to create a group that would be inclusive of all members, would encourage members to advance their craft, and that promoted and reflected the shared purpose of the group. And they were quite successful in carrying this out in a way that fit into and enhanced the fictional universe of the group.