#hashtagging and #learning in boyband fanfiction

The One Direction Chronicles 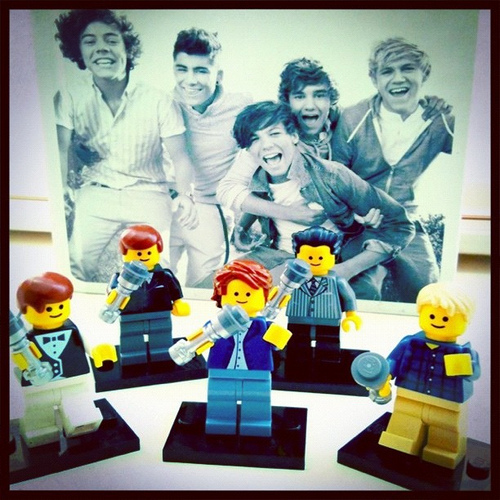 “Louis saw it, and he retweeted it, adding hashtags like #brilliant and #mynewbff and before I knew it, he was following it. Our friendship was meant to be.”

So begins a story of romance between a girl and her favorite boyband member with the qualifier that it is “150% fiction”. In our informal conversation, the fiction writer potatoe61 positions her favorite boyband, One Direction, as having important distinctions from the regular boyband image. My informant claims that “obviously” they are more attractive than the likes of boy band members popular in the early 2000s, but also that they have more populist ways of interacting with their fan bases. A prime example of this kind of engagement was the way that singers of One Direction interacted with their fans on the social media platforms of Twitter and Facebook. Their prominent presence and practices of personal fan engagement on those sites — retweeting, mentioning, responding, friending — assuredly play no small role in why potatoe6’s stories are animated by narratives of deep engagement with social media.

Fiction written as extensions or remixes of popular narratives are not new phenomena. Stories using famous people, like actors, singers, and athletes, as characters in an original narrative, are also not new but can be a thornier issue, as many fan fiction websites do not allow this content citing ethical concerns. Perhaps, potatoe6’s story and many like it show important junctures in ways fan fiction writing and sharing practices have usually been articulated. In this blog, I will describe fanfiction pursuits and think through some generational changes and ways in which these “fannish” practices are relevant to connected learning.

What is fanfiction and how is it learning-connected and “connected learning”?

Fans engage with the sources of their fandom in many ways: talk about it, “like” it on Facebook, remix it, write about it, and buy related paraphernalia. Writing fiction connected to fandoms is a popular cultural practice that is connected to extending, layering, and mixing original texts such as narratives found in popular TV series, music, or books. For example, writers might produce narratives exploring what would happen if Hermione was the “Harry” of  the Harry Potter franchise, or if the characters in certain vampire films were not heterosexual, or what the backstory of a new hit song on the radio would read like on paper. Fanfiction, or “fanfic” as used in the wilds of the Internet, is also a practice that has been increasingly technologically networked, as the locus of discussion and publication of fanfic has migrated from printing and paper-based zine circulation to new homes in online communities. The stories that are written by these fans usually continue or alter the plot of the original storyline and expand or revise the relationships between the characters within the story. Depending on the writer, fan fics are typically a work in progress and are written in a sequential manner, meaning they are able to add a new chapter to expand their plot.

The story of potatoe6

Now, how does a teenage girl tweeting a chaptered romance story ignited with a single tweet tell us something about new media and learning? Her interest in her favorite boy band, filtered through the form and content of social media, animates her fiction writing hobby and involvement in the fanfic community. Her fancy of Louis, a boyband member extraordinaire, is able to bundle her writing hobby, her engagement with Twitter, and her conversations within her peer group. To upload her stories, potatoe uses her smartphone and has chosen a site that does not censor fiction based on real people (RPF) and boasts excellent mobile integration — wattpad.com. The overlay of potatoe’s popular fannish interests, literacy-based writing and reading practices, and the activation of social and mobile technology make hers a fascinating case of connected learning.

Fanfiction can be framed as the poster child of new forms of literacies and learning. The practice is animated by many elements of connected learning exhibited in online spaces; the moving pieces involve interest-driven learning, deep technology mediation, peer-to-peer writing, feedback, and getting good at academic and learning practices that are valorized in American schooling. Neatly mapping onto nodes of a connected learning network, we see articulated interests, hobbies, and social connections developing side-by-side in formal and informal spaces, linking academically-sanctioned and unsanctioned habitats. Writing skills dovetail with being into a particular fandom (insert your favorite band, series, or movie franchise here). In thinking about connected learning, we account for permeability of barriers between in-school and out-of-school activities, especially with interest-driven learning activities like fanfiction which particularly lend themselves to social technologies.

According to the connected learning model, individuals learn best when their learning is reinforced in multiple settings, which can be seen in fandom-animated online learning environments where users can produce their own stories and gain valuable feedback from users on how to improve their storylines. The resources available on fan fiction sites are ample, including the option to have a beta-reading check for grammar or writing errors, joining a writing forum where tips and suggestions are contributed by users, or to have other users rate stories to boost popularity. In regards to academics, student writers are able to utilize fanfiction sites to express their creativity and pursue writing that is relevant to their interests. Writers within a particular domain also share a common purpose, to contribute fan-created stories of a specific genre and to actively engage with one another in the community.

Some of the connected learning principles that online fanfic writing and sharing embody are:

In short, the case of potatoe intrigues me as an observer of new media and learning practices. Over the course of the next year, I will be studying the intersections between popular fanfiction sites, the boyband craze, and social/mobile technology embeddedness and how these environments can inform learning pursuits at large.
Thank you to my wonderful colleague and soon-to-be teacher, Jessica Yen, for research support and provocation.
1 All usernames are acronyms loosely based on the original username.
Banner image credit: Doremi Girl http://www.flickr.com/photos/doremigirl/