HOMAGO: A web platform to hang out, mess around, and geek out

Over two years ago, the Teach Me Stuff experimental platform was launched in an effort to investigate how to best match individuals with coaches and mentors based on their interests.  The lessons learned from the trials of Teach Me Stuff lead to the development of HOMAGO) which stands for Hanging Out, Messing Around, and Geeking Out. The design of HOMAGO was built from a number of lessons-learned during our coaching experiments with Teach Me Stuff.  Through coaching trials done with the StarCraft 2 community , a number of design elements were used to structure the promotion of coaching, mentorship, and collaboration among individuals who share similar interests.  These design elements included:

HOMAGO hosts a number of interests with which users can self-identify with in their profiles and participation related challenges and geekouts.  Users can identify with and participate in a number of interests hosted on the site. Currently, these interests include Crafts/DIY, Web Development, Minecraft, and Starcraft.  Users can host their own hangouts , known as geekouts, as well as join geekouts created by other users.  Hangouts are done through Google+ Hangout conferencing.  Geekouts can be centered around development of new skills, or just a means to find others who are equally skilled to hang out with and to collaborate. 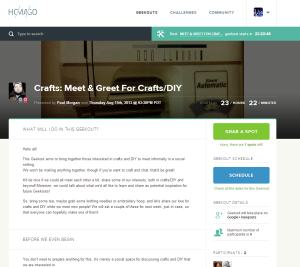 Geekouts allow people to get together around a common interest or task.

The geekout feature was one of the designs which emerged from the preliminary trials with the StarCraft coaches and Minecraft hangouts. In a previous blog, I describe how coordinating schedules of both mentors and students proved to be difficult.  Instead, we opted to organize group events which could be lead by a coach or mentor.  During these trials, we also realized the potential for those who identified themselves as ‘noobs’ to still contribute in a meaningful way by bringing their own experiences in improving, or point other noobs to online resources that helped them develop their skills.  For example, StarCraft coaching sessions would involve both expert advice from high-level players and contributions from newer players who were curious about executing a strategy they saw in a professional tournament, or adding advice they picked up from a professional gamer’s live stream. The geekout format allowed for players to jump in and contribute to a group coaching effort, rather than leaving the responsibilities of directing the hangout to the host or expert within the group.

An example from a previous geekout on TeachMeStuff was when one player practiced against another opponent, demonstrating what would seem to be a fairly difficult strategy to counter.  Numerous players took their turns in trying to crack it, and other players referenced strategies they’ve seen in their own competitions or in professional games.  The contributions came from every player at all skill levels, as they are still capable of spectating high-level strategies even though they may not be able to execute them.

The geekout format was found to be an effective reflection of the connected learning principles among StarCraft coaching and other interests. The communities on HOMAGO were selected through previous case studies of interest-driven communities which reflected the community that HOMAGO aimed to support. Geekouts had a shared purpose during each meeting which was dictated by the group’s needs and interests, and they provided coaching and collaborative opportunities online in a peer-supported geekout environment.

Another feature developed with our past experiences with coaches was the ability for hosts to explicitly link to written tutorials, videos, or other resources that may be helpful to refer to before attending the geekout.  This also serves the purpose of documenting any other references discussed in the geekout, which was common during the StarCraft coaching trials.  For example, a coach may often refer to a strategy that they observed during a high profile tournament, or in a tutorial written up through a forum post.  Gaming wikis, videos, and forums proved to be vital in previous coaching trials for both StarCraft and MineCraft, where the communities utilize a large amount of community-created content.  Previous trials also showed that the hangout format also served as a point for discovering new content around the interest of the participants. 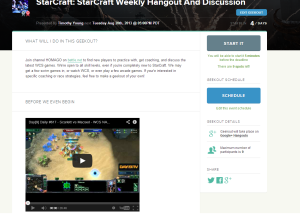 Players are capable of linking to their favorite tutorial videos or other resources they have been using to learn.

Community challenges also serve as a way to bring people together in order to work through a shared purpose.  Challenges range from contests hosted on other websites such as Instructables to tutorials or discussions that allow participants to create and be productive.  Challenges and geekouts are deliberately left open, so as to allow the participants to contextualize the purpose of their get-together through their own interests, rather than enforce a particular agenda or conception of what the participants should be doing. Challenges also offer another avenue for community members to work toward a shared purpose and orient their collaborative efforts toward a production-centered goal.

HOMAGO is continuing to run geekouts on a weekly basis and building on top of the design principles of previous trials.  Though HOMAGO is focused on a hangout format, we are trying to think about how to explicitly encourage one-to-one coaching relationships in a more meaningful way.  Through support of coach and mentor matchmaking, the benefits of hangouts may be able to extend to outside the platform as individuals develop relationships within their own respective interests.

While the beta tests are still ongoing during the summer, more features will be added based on the feedback of individuals who participate in the first few geekouts and trials.  Overall, the goal is to support the development of coaching and mentorship hangouts through what we’ve learned from previous case studies of interest-driven communities, and provide the individuals in the community with the tools to best be productive and communicate their skills to others.