An Issue Full of Knots: Ownership and Sharing in Crochet 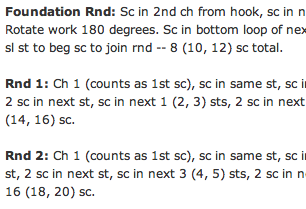 Figure 1. An example of what a pattern looks like. This excerpt is from a free pattern for baby slippers and is unrelated to the patterns mentioned in this text.

Recently, there was a very public argument between two well-known pattern authors and their fans on the authors’ Facebook business pages, blogs, and Ravelry patterns. The issue started when a pattern author – Joyous Knots* – replicated a crocheted item and then released the replication’s pattern. This was not Joyous Knot’s first replication, and several of the replications had come from a very popular designer – NightSong Crochet*. After exchanging messages with Joyous Knots, NightSong Crochet posted on her Facebook business page and blog how hurt and angry she was that somebody would replicate her designs and claim the pattern as their own. As she posted on her blog,

“I’m human, and I get hurt. I do all of the things people normally do when they’ve been wronged.  I believe that original ideas should be legally protected and respected.”

Through this recent argument between the pattern authors and their supporters, we are able to see how learning, career aspirations, and equity become tangled up in these issues of creativity, ownership, and sharing as they are hashed out in a connected learning environment for fiber crafters. Disentangling the practices also helps us gain insight on the value that each side brings to the expansion, diversification, advancement, and learning of the community.

The debate over ownership rights to patterns, ideas, and the “look” of items, however, is not new or unique amongst crocheters and the fiber crafting community. Authors and researchers such as Lawrence Lessig take on issues of creativity and control in a digital age, while Johanna Blakley takes on these issues as they specifically relate to fashion and design. Participants of DIY communities related to needlepoint and fiber crafting have also taken up the legalities and values of some of the community’s sharing practices.

Replicating designs may be fairly common – and even expected – in the fashion industry, and it is also normal to see fiber crafters attempt to replicate commercially produced goods, such as a Gap knit sweater. Joyous Knots and NightSong Crochet were not just anonymous designers within a big company, however, they were members of the online crochet community. As the argument between the two designers played out, their friends and supporters became quite passionate as they tried to protect and support “one of their own.”

On the one hand, free distribution of learning and materials such as patterns helps contribute to these shared purposes. The continuation and expansion of this community is partly due to a large number of learning resources being freely available. Members of all income levels and experience levels are encouraged to participate and benefit from the wide availability of learning resources and free patterns. And because this online community has such a low barrier to entry (both in terms of economics and experience), membership is incredibly diverse. Through free patterns and mentorship, novices are able to learn the basics and work towards their crafting goals.  Advanced crafters are able to develop new techniques and further their abilities through the feedback and mentorship of their peers. The diversity of members introduces new ideas, new interests, and new traditions and techniques to the community. Experimentation and modification are encouraged. Groups such as those we see at Hogwarts at Ravelry are able to use free patterns as the base for collaborative projects where participants merge and modify the original pattern.

Some fiber crafters argue that there are benefits in crafting resources – patterns and the use of designs – being free. One pattern author explains why she only writes free patterns:

“I believe in open source entirely and contribute to this ethos.”

Those who supported Joyous Knots agreed with this stance. They were supportive of the benefits of an open source community, and argued that replicating and competing only pushed designers to grow. One supporter said:

“Imitation is the highest form of compliment and provides an opportunity to grow.”

As one supporter said:

“How can it be stealing when you figured it out? Just because someone had an idea first doesn’t mean you can’t think of the same thing!”

“There is no infringement – you wrote the pattern!”

On the other hand, buying and selling patterns and goods  is also incredibly important and integral to the fiber crafting community. The pattern market also promotes learning, community, and advancement of fibercrafts. The pattern market also allows women to turn their hobby into a source of income and possibly even a successful business, allowing them to give more to the community than they might if they did not earn some income from the hobby.

Money can be tied to how members join the community: many local yarn stores offer knitting or crochet classes for a price.  Some crafters take up crocheting or knitting because of the potential to earn money. As one crafter told me:

“I was staying home and so I tried to figure out something to do to make money while I was at home. So I…went online and taught myself so I could start selling crochet stuff too.”

The pattern market is also a powerful motivator for diversity, creativity, and growth in fiber crafting.  Similarly to fashion, the competitiveness of the market provides designers with a constant challenge to develop unique designs,  improve upon existing designs, and use or create new techniques. Innovation happens as designers challenge the norms and the standard way of doing things. One pattern author used a very different stitch type to create a unique owl hat that differed from the very popular style:

“And I wanted something that was different…I didn’t want the same look that everything else was. And so, I just looked up stitches.”

NightSong Crochet had carved out a unique niche for her patterns in the saturated baby bootie pattern market. On her blog, she detailed the incredible amount of time and effort she had spent to differentiate her baby booties from others. The need to earn an income from the hobby motivated her to spend the time and energy needed to create a unique look. She developed a new bootie sole using a combination of stitches and a new technique that mimicked the look of real shoe soles and differed from the “standard” stitching method used to create soles in booties.

Creating a successful business in a saturated pattern market has also led pattern authors to appeal to the largest audience possible while also taking on new roles as teacher and mentor. On her blog, NightSong detailed the time and energy it took her to make her patterns – and not just designs – high quality.  She would spend weeks coming up with and working out the kinks of her pattern.  Then she would spend several more weeks having “testers” try it out and offer feedback on clarity and errors. To ensure that customers of all experience levels would succeed in making the booties,  NightSong also incorporated detailed images, instructions, and even videos (that she has made) to explain parts of the pattern. NightSong’s patterns were not just formulas to create a bootie, they were instructional lessons.

This level of detail, testing for clarity, and guidance (through descriptions, pictures, and videos) is extremely rare to find in free patterns. During the argument with Joyous Knots, one of NightSong’s supporters told NightSong:

“I love your patterns. I am somewhat new to crocheting and your videos have really helped me when I was first starting out.  Without your videos, I don’t think I would have figured out how to use the magic loop technique or make your booties. I always seek out your patterns first, because your patterns ensure that I understand everything.  That is what will keep me coming back as a customer, even if patterns like yours are available for free.”

In addition to creating top-notch patterns, NightSong Crochet also invests a significant amount of time into her fan community and making sure her followers and customers are happy and successful in their crafting of her patterns. She responds to questions about patterns, offers help for those who have difficulties, updates her fans on up-and-coming patterns, keeps up with the feedback from her testers, and supports and advertises for fellow pattern authors and those who sell crafted items.

While much of this has helped NightSong Crochet become a very successful crochet pattern business, it is also partly made possible by the money she has earned through her business. Each individual pattern is sold for a pittance relative to her time and effort, but the high quality patterns and loyal fanbase developed through her investment have resulted in a very large number of pattern sales. At the time of the argument with Joyous Knots, NightSong had over 15,000 fans on her Facebook business page and had earned approximately $40,000 in Etsy pattern sales over two years.

NightSong’s income from this successful business motivated her to invest more than she would have in a hobby, but the money also allowed her to put more time and energy into the craft–and into the fiber crafting community through community building, resources, instructional videos, guides, and mentorship. She benefitted from the income, but so did the crafting community.

NightSong’s followers were quite vocal in their support of her work, her contributions to the crochet community, and the wrongness of somebody replicating her work and threatening her business. Some supporters offered links to copyright laws or suggested she seek out legal counseling. Other fans expressed their commitment to continue buying her patterns even if others offered them for free.

Ultimately, however, NightSong Crochet and Joyous Knots could not find agreement in regards to the replicated patterns. Within 24 hours of the argument being made public, the argument had ended with NightSong Crochet promising to continue looking at options for legal protection and Joyous Knots insisting she had done nothing wrong. Within 48 hours of the first Facebook post, the entire conversation had been deleted; both authors felt that the argument detracted from the positive atmosphere of their work and the crochet community. Although this argument has ended, the issues of sharing, creativity, and ownership of designs still remain – for these authors and for the fiber crafting community as a whole.

* Names have been changed to protect identities.